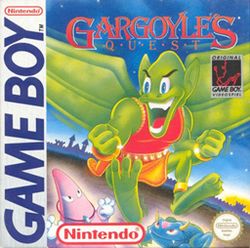 The main character, Red Arremer (Firebrand in the localizations) made his debut in the Ghosts 'n Goblins series. Gargoyle's Quest was followed by two sequels: a NES game called Gargoyle's Quest II released in 1992 and Demon's Crest for the SNES in 1994.

Red Arremer (Firebrand) is a gargoyle who is predestined to be the Red Blaze who saves the Ghoul Realm from the evil wrath of King Breager and brings peace to the land once again.

A long time ago, the Ghoul Realm barely escaped great peril. A large army of Destroyers came from a neighboring universe. The creatures of the Ghoul Realm were no match for the powerful Destroyers. Just when everyone had given up hope, a great fire swept over the Realm, wiping out the Destroyers' army.

Several hundred years have passed and the Realm is threatened once again...