Garou: Mark of the Wolves/Gato

Gato (牙刀) is a powerful and very stern martial artist. A product of a tragic past, Gato acts stoic, rude, cold and, in battle, ruthless to everyone he meets other than his sister, Hotaru. 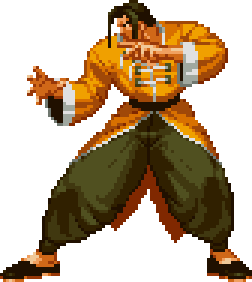 Gato is an amnesiac who cannot entirely recall his past. Despite his condition, he has no concerns outside of besting anyone unfortunate enough to cross his path. In his ending, a stranger saves Kain R. Heinlein from the crumbling mansion. Gato appears to know the stranger, but he is blinded before he can act. As the mansion falls, the stranger taunts Gato, telling him to start training in order to defeat him. Gato appears to have a vision of his past and his father, and angrily swears vengeance - this insinuates that the stranger is connected to Gato's past (the stranger's outfit appears to resemble Gato's), but nothing has been officially confirmed. Gato also appears in the ending of Hotaru Futaba, who claims that he's her older brother and slaps him when he denies even knowing her. He then leaves her there, and Hotaru silently prays for Gato to come back to her and their father.