Garou: Mark of the Wolves/Grant

Grant (グラント) is a fighter with great power. He is Kain R. Heinlein's childood friend and bodygaurd. He practices a powerful fighting style called Ankoku Karate. 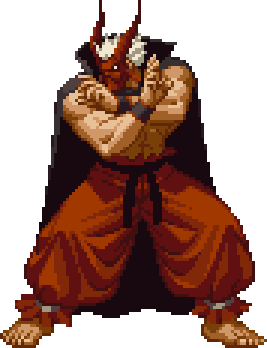 Grant is an old friend of Kain and Marie Heinlein. He protected the siblings from the dangers of the slums under his real name Abel. When Marie was sent away to live a life of luxury, he chose to stay with Kain and watch over the boy as his father figure. Nineteen years before the game begins, Kain had enough of the slums and declared his ambitions for power. Determined to not abandon him, he also invited Abel to join him. Abel agreed and took on the name Grant from then on. They work well together as they share the same vision of greatness. Grant had also made a deal with a dark entity in order to gain the power of Ankoku Karate (Dark Karate), for which he trains in his temple underneath his mansion. Under his new persona, Grant's duty to Kain was to eliminate any intruder or conspirators against them. He has killed many men during Kain's rise to power, eventually choosing to work in the shadows until he is needed. Four years before the game begins, Grant shielded Kain from a gunshot and the bullet was lodged near his heart. Since the bullet is difficult to remove, Grant lives everyday as his last and wishes for a great final battle.

When the "King of Fighters: Maximum Mayhem" tournament takes place, his job is to lure strong opponents to his lair and defeat them before they reach Kain. In his ending, he helps Kain find and subdue the remaining kingpins in Second Southtown.