Garou: Mark of the Wolves/Hokutomaru

Hokutomaru (北斗丸) is the student of the Koppou and Shiranui-ryuu Ninjustu arts. Being the only student of a retired Andy Bogard, Hokutomaru seeks to make his master proud, but often times messes something up by accident. 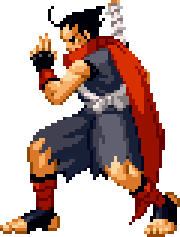 Hokutomaru is a ninja-in-training who's learned both Shinranui-Ninja Arts, and also knows Koppo. His current master is Andy Bogard, who suggests that Hokotomaru join the newest martial arts tournament that's being held in Second Southtown. Wanting to make his master proud, the ninja boy goes off into the big city for the first time, ready to fight anyone that challenges him. His a hyperactivity and mischievousness, mixed with his bag of tricks and Ninja Weapons, confuses and irritates his opponents. In his ending, his master watched him the entire time. He was only left a note by Andy, saying that he is proud of him and that they are not master and student, but rivals.