Gegege no Kitarou 2: Youkai Gundan no Chousen/Table of Contents 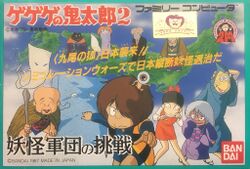 Gegege no Kitarou 2: Youkai Gundan no Chousen (ゲゲゲの鬼太郎2 妖怪軍団の挑戦 , Gegege no Kitarou 2: Youkai Gundan no Chousen? Spooky Kitaro 2: Kitaro vs. Yokai Army) is a RPG game based on a manga and anime from Japan about a boy who is a youkai, a class of spirit-monster to which all of the main characters belong. The main character, Kitarou, is the last living member of a Ghost tribe. He is missing his left eye, but his hair usually covers the empty socket. He fights for peace between humans and yōkai, which generally involves protecting the former from the wiles of the latter. While the game follows the release of Gegege no Kitarou: Youkai Daimakyou (released in the U.S as Ninja Kid), it is not a direct sequel to the original game, which is an action side-scroller.

Gegege no Kitarou 2 plays very much like a simplified traditional RPG. Fights are turn-based, where the player must input his command, and then watch the sequence of event play out until the round is over and the next round begins. However, even though it is simplified, it is actually a rather difficult and challenging game. In the very beginning of the game, Kitarou struggles to survive more than two fights against monsters before needing to return home and rest until he reaches level 2. A majority of the enemies only provide experience points in the single digits until much later in the game, although to compensate, the amount of experience needed to reach each level is low by comparison as well. Kitarou maxes out at Level 10 when he reaches 999 experience points.

The map of the game's overworld is a fairly faithful representation of Japan, along with part of Korea and a small unidentified island. Kitarou must explore the island nation to rescue his girlfriend and the rest of the world from the onslaught of evil Youkai that threaten to take over the world of the living. He must locate several homes, castles, and cave entrances to make his way through Japan, which suffers from spirit storms that prevent him from exploring new regions on the island until some task has been completed first. The game was never released outside of Japan, but a fan-translation patch was published by a collaborative team lead by hackers aishsha and Djinn. The translation patch is available here.

Gegege no Kitarou 2: Youkai Gundan no Chousen/Table of Contents