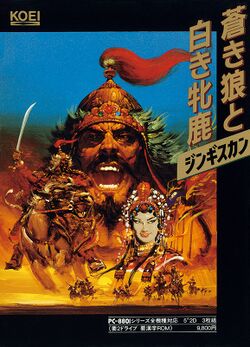 The game takes the player inside the virtual life of either Genghis Khan or one of his archrivals. The player must arrange marriages, father children, appoint family members to governmental positions, and fight in order to conquer the Old World. Armies must be drafted and soldiers must be trained if the player is to rule the lands from England to Japan.

The game has two different ways to play. The first is Mongol Conquest, which begins in the year 1175 A.D, which is a one player mode. Players assume control of Lord Temujin and they must conquer the land by keeping their economy stable, having their army ready to fight, and by attacking other lands. The second is World Conquest, where the goal is to conquer every opposing country.

World Conquest, which begins in the year 1206 A.D, is started by choosing the number of players and difficulty. It supports 1-4 players. Players must choose who they want to be; Genghis Khan (Mongols), Alexios I (Byzantine), Richard (England), or Yoritomo (Japan). Then each player must randomly select the stats of their leader and successors. The player must stop a random number to choose the certain stat. This is done until all stats are chosen for the certain character, but they can be redone. After everyone is ready to go, the game begins. The countries of Eurasia cycle through; when it goes through a country, it means they have used their turn. When it comes to a player's country, they get to make three choices. These choices include training the troops, buying a certain product/quantity from a merchant, drafting soldiers, sending a treaty, or going to war. Each act takes one choice away until the three choices are used; then the cycle continues. Once every country has used their turns, the season changes and the cycle goes through again, but in a different order. Seasons determine when you must pay your troops, when the farmers harvest the crop, when food must be distributed, etc.