Kagekiyo has arrived in Kyoto. His trip is half done and now he needs to collect all sacred items. 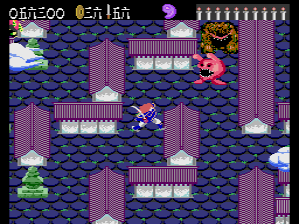 Why do we need mattocks while we can slice them?

Ignore the skull dogs on your left and move on. Two pagodas are blocking the paths, destroy the straight right one and proceed. The first part of maze consists of Onihime coming out from cart generator, skull dogs, and hyoutans shooting tops out. A box is hidden behind two pagodas, the upper of which can be destroyed. The next part has two paths, one of which has one sword point in the end, and the other continues with less enemies. There are two more hyoutans on the right, and two Namazu pools in a shaft on the left. The walls of the narrow passage on the right can be destroyed, with a candle inside the lower wall. A few more skull dogs and Onihime carts are in the second part of maze, and when you have come to the third part, the generators (which look like Gaki generators) will release Heiankyo. There are three toriis that lead to three different paths, where the nearest one sends you to Wakasa, the middle one to Iga, and the farthest one to Yamato. Beware of more Heiankyo generators. 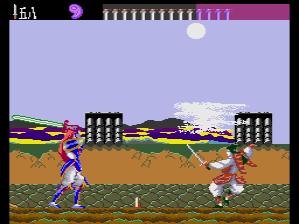 Yoshitsune with daggers, again, with only a tiger. This time your sword is strong enough to eliminate him in two hits. Proceed to Echizen.

Benkei has obtained a new rod with a spiked ball. At the start there is a scroll, which is so high that you need to jump a few times to collect it. Beware of the fire arrows, and take down this Benkei with 100 life. Proceed and you will find some vortexes generating moth, which is very annoying here, being difficult to hit. Some generators are even worse that they hide behind the trees. Pest them all and proceed to Oumi.

You are ambushed by a barrage of fire arrows. Run forward and when you see a swinging spiked ball, Yoshitsune will appear with long sword. Dispose of him and you can arrive in Ise. 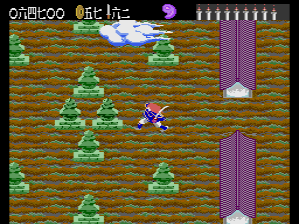 The hidden path to Ecchuu. 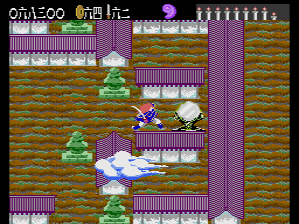 A mirror is found.

Namazu pools welcome you. A few hyoutans hide in the turf array before some walls, and a few more among the pagodas after. There is a place with two odd pagodas, with an invisible torii guiding you to Ecchuu, another gag stage with an important item. You can choose to collect all goods and return to this path later. The paths in the next walls are blocked by destroyable pagodas, and beware of the spider-generating web. In the middle of next room with four hyoutans, a candle is hidden in the only destroyable pagoda. Next maze is consisted of grass-growing walls, but you can simply take the straight route to proceed. Out of the maze you can find three more hyoutans and three pagodas, with the upper-right pagoda hiding a 1000 point item. A breakable turf starts next area with more turves and hyoutans, follwed by another grass walled maze. The final part of maze has many breakable walls, and one of the sacred item, the Yata no Kagami (mirror) with anti-inazuma function, is hidden in a corner. Exit from the right side of the maze, and you can move to Kaga.

You begin at a line of platforms above a lake. Two vortexes generating moth will be what you do not want to leave. Proceed on more platforms, collect the candle, and jump off the farthest platform to arrive in the island with torii, and move on to Mino. 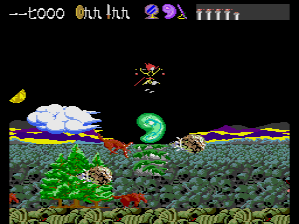 Another chance of Magatama.

A lot of bouncing rocks will fly to you, dodge well, but do not let the flying rocks from behind run away. You have two scrolls to dispose of some of the rocks. You will run over a Yahei in the middle of stage, but do not waste time on that. On the second hill you will find wolves and fire arrows. The first torii at the foot of hill will bring you to Owari. Use the aforementioned flying rock, or even the wolves, to reach the platform behind, which has a Magatama. Another torii sits behind the platform, and it will guide you to Shima.

Shima (志摩, Shima?) is the bonus stage that leads you to Owari as well. 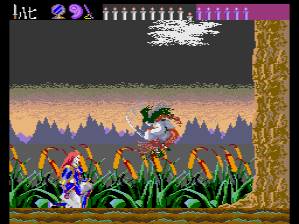 He appears behind the tree.

Yoshitsune, with his long sword, will request a one-on-one duel - but he ambushes you from behind a tree. Kill him and reach the torii, and you will move across the sea and reach Echigo. 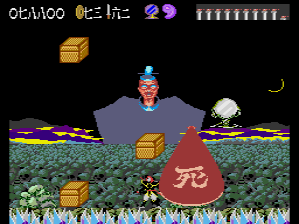 The other gag stage filled with Namco staff talk. Start the stage with a breakable pagoda and a scroll. Proceed and a Daimajin will appear, and you can simply beat him with one sword wave at his chest. The lone large rock has a hidden talk above, and the box later has one below. Keep running and you can find a torii and a pack of bouncing and flying rocks. If you get past them, Yoritomo will appear again and bother you. Another Yata no Kagami is in the middle sky that, you must use the two boxes on the left to collect it. One more torii can be found at the end with another large rock. For whichever torii you take, you will always reach Shinano.

This short cave stage only features a Mukade and Yoshitsune with long sword. Next stop will be Shinano.

Beware of the fire arrows. A Hannya will appear at the second tree, and Yoshitsune with sword will ambush you after. You will move on to Mikawa.

You are at the seashore with less ground. A gaki generator forces you to move quickly to encounter the Yahei in front. A few more of both occupy the hills after. After the hills you can see a candle above a very high platform, and you need to collect that by using the large rock on the right side, then return. The next hill is occupied by three more Yahei and a Gaki generator. Eliminate the Yahei, and use one of the Gakis to climb to the top of hill and proceed. Jump over a few more floating platforms, and you will reach the island with a stone lion and a torii. Take the torii and you will move on to Kouzuke. You can also choose th climb the hill, jump into the middle tunnel of platforms, and finally arrive in Sado for bonus. 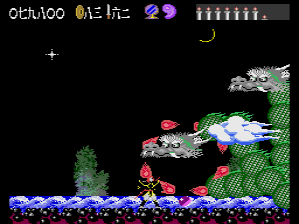 The first part of this stage are consisted of floating platforms. You can find a candle and a box of 10 Zeni at the place of a large rock. Jump to the ground and you will face the three headed dragon. Cut their heads and their fireballs, claim their sword points and the Kusanagi Sword, and you will not need to worry about cutting hard objects. Leave the stage after refilling life with three Tawaras, and head to Kai.

No enemies, but you must run away from the flying rocks behind. More rocks are flying toward you in front, dodge them. The torii to Toutoumi is near, but you must use the bouncing rock behind to claim the candle above.

Sado (佐渡, Sado?) is the fourth bonus stage. However you may not like this stage with high platforms preventing you from collecting orbs.

This short stage has Benkei with rod and a few vortexes firing thunder bolts. You will move to Suruga for a few more legs left. 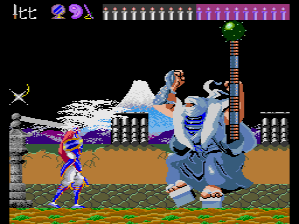 Benkei will be moving to you from far away with his rod. You can choose to run to him and fight, but it is better to stay at the start and wait for him - you will not like to see the ball stuck in the path among other balls. Now just run to the right with spiked balls and fire arrows. You will notice a scroll hanged up, but it is useless. Proceed to Suruga.

You will encounter Benkei with rod, and some vortexes raining poison mushroom. Beware that a vortex is hidden behind a tree. Like other stages, you will arrive in Suruga. 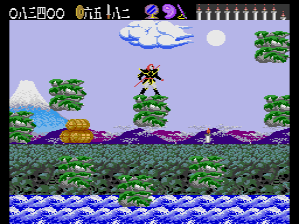 A final test of your jumping skills.

You will need to cross the river. There are no enemies, but no ground either. All you need to do is to jump over the platforms and reach the only torii to Musashi. You can ignore the Tawara and the box, as there is a candle that you can collect without risk.