You have made so many efforts to finally arrive in the final hub. Kamakura is only a few more legs away. 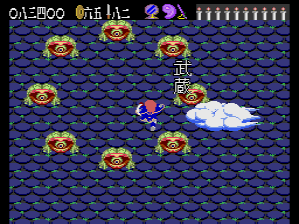 You are welcomed by eight Kishokugan surrounding. Get rid of them and move right. On the right there are nine Tawara and a single torii. If you have all of the sacred items, just refill your life with these Tawaras and jump in the lone torii, which guides you to Sagami where Yoritomo is. Otherwise, proceed and kill some more Jigokusha and generators. You will finally discover nine more toriis, which transport you back to Wakasa, Iga or Yamato. You will need these backward warps in order to complete your sacred items. For a quick info of destinations, if torii to Sagami is in the middle row: 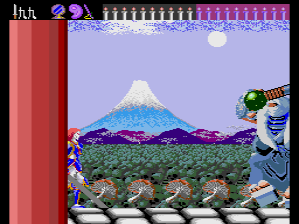 Scary? If you have the right item, it is a cakewalk.

You will hear Yoshitsune's theme for one more time. A line of vortexes will be raining poison mushrooms on you, but your Magatama will make them a joke. Stay at the starting point and wait for Benkei, with his rod. Eliminate him, and Yoshitsune will appear with his sword. Defeat him as well, and start moving on, but you can destroy the vortexes for some health recover. You will encounter some spiked balls. Just run below the hanging spiked balls, but beware of the swinging ball. The rest of the stage is a straight path to Kamakura, the final area. 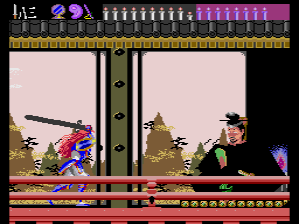 You have reached the final stage. If you have missed any of the sacred items, you are not even able to defeat his first form. Minamoto no Yoritomo tries to stay ahead, and attacks by firing Inazuma, but your Kagami Mirror will render them useless. Yoritomo has three forms, each with 80 life points. By removing his first life bar, he will reveal a monster face, and starts to fire a different bolt, which is not affected by your mirror. Remove his second life bar and he will transform into a giant statue of Buddha. Deliver the last 80 damage to him, and the background will turn black. Yoritomo will shout "My soul will never perish!" and disappear, and Kagekiyo will then fall over and explode - just as if he had run out of energy. You can now sit back and enjoy the ending - which features a poem consists of 104 Kanji and Hiragana (no Katakana) characters scrolling across the screen - as sakura leaves begin raining down in front of Mount Fuji (which had been the setting for Namco's own Pole Position back in 1982).