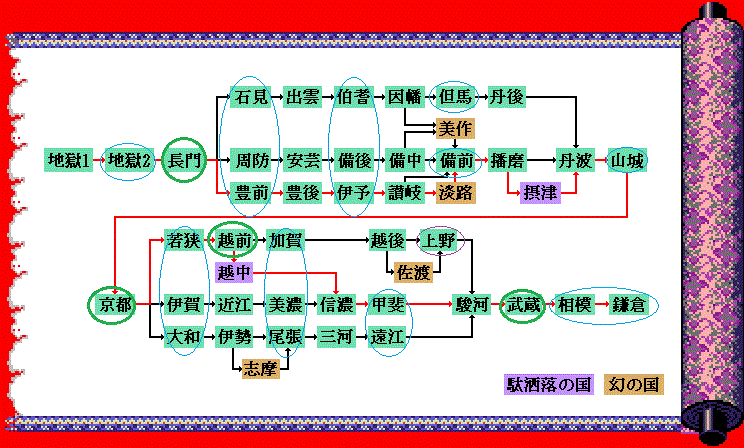 Kagekiyo will travel through ancient Japan, when the provinces were named by the Gokishichidou rule. Guide of the map:

This walkthrough will be divided into three parts:

Kagekiyo will reach next stage by entering a torii in the end of stage. Sometimes a stage may have more than one toriis. 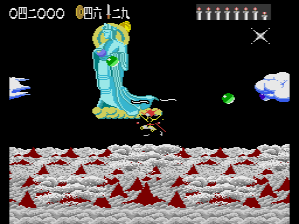 Aim for the useful orbs!

Some of the stages are bonus stages without enemies. You will see Amaterasu the Sun Goddess flying around at the top of the screen, raining powerup orbs. Collect as many as you can before the music fades out. Part of the ground will be covered with iris flowers, but collecting them has no effect. You will proceed to next stage afterwards. 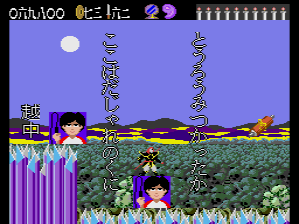 Staff: "Welcome to the gag stage."

Some stages are filled with staff talks. You will reveal these talks at fixed location, but with random talking people. 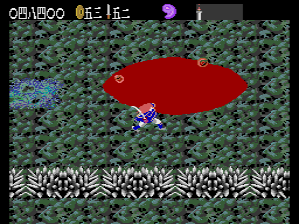 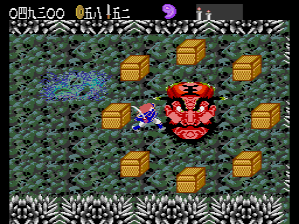 Anytime Kagekiyo falls off a Small Mode stage, he will have to clear this stage, filled with skull dogs, skull spiders, and Jigokusha generators, with 10-22 life left. In the middle of stage there is sometimes a blood pool, where Kagekiyo can escape to Kyoto with all Zeni lost, if he has at least 70. At the end of stage, Emma-Ou will show Kagekiyo with eight boxes. By opening a box with "生", Kagekiyo will return to the stage he has fallen, or Kyoto, take the earlier one. If he hits a box of "死", he is dead. There are only four chances to resurrect in this method, and the fifth time Kagekiyo will not be able to escape from death.

If Kagekiyo remains upon any Small Mode stage for too long, Yoritomo will rise up in the background and try to flatten him with a shaku which can cause significant damage. If he wastes too much time on any Big Mode or Over Mode stage however, birds will slowly appear on the screen and start flying around above him.