At the start of this challenge, Sal the Sea Serpent will appear in the top-left corner of the screen and extend herself to the right as she introduces herself: 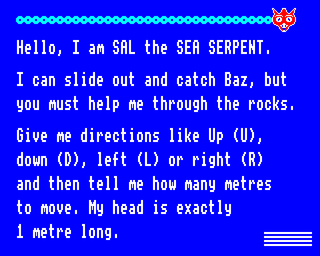 Once you have pressed Space to continue, the screen will cut to Sal at the start of a randomly-generated rock maze with Baz waiting, still in his boat, at the end of it; the text "Up, Down, Left or Right?" will then appear at the bottom of the screen as a cursor flashes to its right, and you will have to press U, D, L, or R to tell Sal which direction to go in. The text "How many metres?" will then appear below it, and you will have to press one of the number keys to tell Sal how many metres to move - however, if you push the wrong letter or too big a number, Sal will crash into the rocks, and Baz will row away off the screen's right side as the text of "Beastly Baz has escaped this time! You will have to try again." appears at its bottom, so you will have to press Space to return time back to the start of the challenge. But once you've directed Sal through the maze to Baz, she'll wrap her tongue around him and lift him, again still in his boat, out of the water as the text of "Well done, SAL! No escape for Beastly Baz!" appears at the bottom of the screen - and once you push Space, Wordy shall fly onto the screen from its left side, fly back and forth thrice, and say "Hooray! You've beaten Baz at last. He won't get away this time. Being Beastly doesn't pay! Not when the Geordie Racers are after you. I wonder what will happen to poor old Baz now?" (as a result of his crimes, he would most likely be imprisoned). Once you have pressed Space for a final time, the game will return to the title screen as the 8-bit version of the serial's theme is heard for a second time (but this time, its bottom is obscured by a black rectangle containing the text "And that's the end of the game! Thanks for playing. Bye.") and stay there until you press Break to return to the BBC Micro command prompt or turn off the console.