At the start of this challenge, Wordy will appear in the top-left of the screen and introduce Baz for a second time, as he walks into view from the screen's left side below him and down into its centre; this time he will also inform you of the fact that Baz's men steal things and hide them for him to collect later. 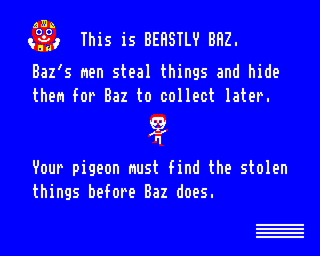 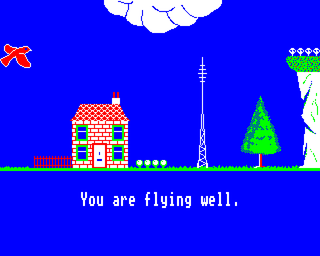 The screen will then cut to a shot of your chosen pigeon flying over Newcastle as the text "You are flying well." appears at the bottom of it; you will then be presented with a series of questions about where you want to go, but there is only one right answer to each of them (and they are indicated in bold):

Where do you want to go?
Cloud
House

What part of the house?
Garden
Roof
Chimney

There's a hole in the roof.
Do you want to fly in?
Yes
No

Well done! You found a pendant in
the attic. Hard luck Baz!

Where do you want
to go next?
Cabbages
TV mast

What part of the TV mast?
Top
Middle
Bottom

Where do you want
to go next?
Tree
Hawk's nest

What part of the tree?
Top
Bottom

Choose something
for the baby hawks
to eat.
Bread
Corn
A dead mouse

Quick, off to the hawk's nest.
Give the baby hawks the food
to stop them squeaking.

The baby hawks think the dead mouse
is delicious. They are quiet.

Well done! You found a bracelet in
the nest. Hard luck Baz!

Once you have pressed Space to continue, the game shall proceed to the third challenge, in which your chosen pigeon's position is represented by a cyan circle with eight white arrows sticking out of it; his (or her, in the case of Bonny) flight path will also be indicated by a trail of microscopic cyan dots.