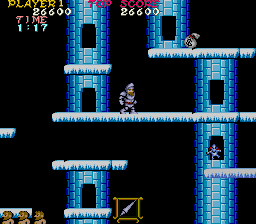 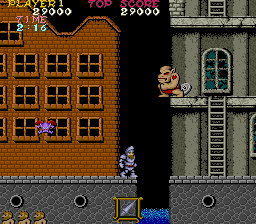 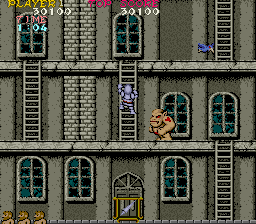 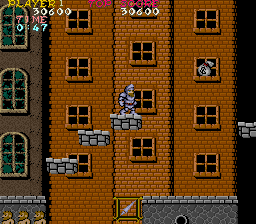 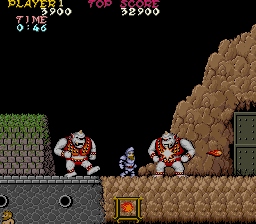 If you thought the lone Unicorn that guarded the first fortress door was tough, wait until you have to deal with two of them. The trick here is to engage only one at a time for as long as possible. Sometimes you will have no choice and be forced to run to the right where you will engage the second Unicorn, but if you can help it, remain to the left and fight the first Unicorn until it is defeated. Then you can continue to the right and face the second Unicorn. Aside from the fact that there are two of them, they don't behave any differently than before. The first Unicorn has a penchant for jumping over your head and landing to your left, in an effort to squeeze you in between the two Unicorns. Even if he does this, move right only as much as you need to in order to remain safe. Once both Unicorns are active (as can be seen in the picture to the right), it becomes far more difficult to deal with them effectively, and nearly impossible to dodge their attacks. 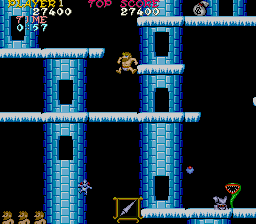 The lone secret of the second stage is a hidden set of Armor, very early one where it is least likely to help you. Nevertheless, if you find yourself without armor this early in the stage, you will no doubt want to pick it up. To receive it, simply climb up to the highest ledge which is just to the right of a Green Monster. Then simply fall off the ledge to the left and land in front of the Green Monster. The armor will appear and land in front of the Green Monster which resides on the platform below.

How to play
Appendices
Walkthrough
Retrieved from "https://strategywiki.org/w/index.php?title=Ghosts_%27n_Goblins/Stage_2&oldid=248237"
Hidden category: