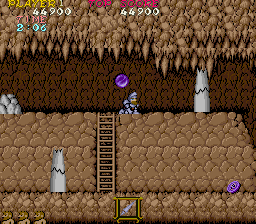 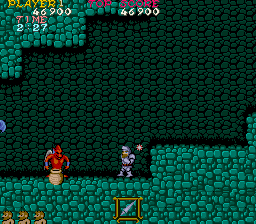 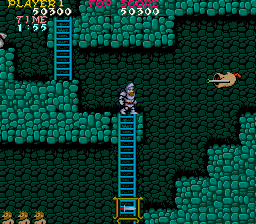 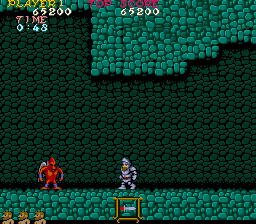 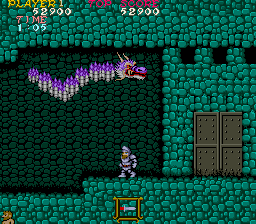 This is the first of three dragons that you will face throughout the game. This snake-like dragon flies about through the air in a somewhat erratic fashion. It can quickly go from gently floating along in one direction, to diving straight down on top of Arthur. As you attack the tail, the segments continue to disappear until only the head is left. While this can considerably reduce the threat of the dragon since its size diminishes, the only part that matters is the head. You must shoot the head six times in order to truly defeat the dragon and collect the key. The safest place to attack from is directly behind the dragon's head. You can follow behind at a safe distance and leap up in an effort to hit the head. When the dragon reaches the end of the screen and decides to turn around, quickly move to the opposite side if the passage is safe. Otherwise, run back and wait for a safe moment to pass beneath it. Don't forget to be on the look out for the orbs of fire that the dragon can fire at you.

How to play
Appendices
Walkthrough
Retrieved from "https://strategywiki.org/w/index.php?title=Ghosts_%27n_Goblins/Stage_3&oldid=235007"
Hidden category: