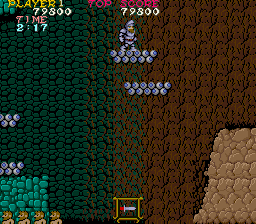 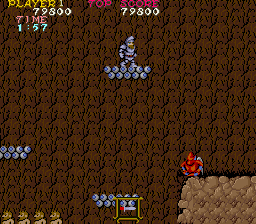 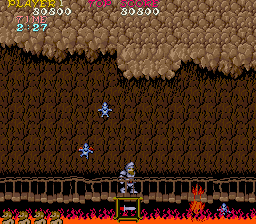 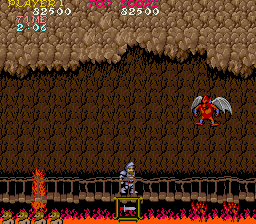 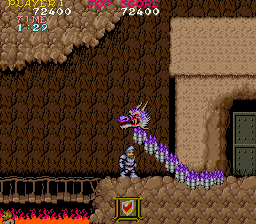 The battle with the second dragon is very much the same as the battle with the first. Remember to trail safely behind the head and avoid giving it an opportunity to dive down and land on top of you. You can chip away at the tail to reduce its size, but the head is what you must ultimately fire at. You can use the positioning of the bridge for minor protection, as the dragon will rarely dive down low enough to hit you there. However, it might very well hover at the level of the bridge and run you over. Remember that in the NES version, some bosses are immune to certain weapons, and the Dragon is immune to the Lance. If you some how manage to come back in possession of the Lance, you have no choice but to die and start over, collecting a new weapon in the process.

There's a trick to get the key without battling this stage's boss. After defeating the Red Arremer, walk to the right and listen carefully to the music. As soon as it changes into boss music, walk to the left. When the message "Take a key for coming in!" appears, walk again to the right and collect the key to advance to next stage.

How to play
Appendices
Walkthrough
Retrieved from "https://strategywiki.org/w/index.php?title=Ghosts_%27n_Goblins/Stage_4&oldid=665343"
Hidden category: