The Commodore 64 version of Ghosts 'n Goblins is based on the third arcade stage. However, there are changes to the layout on this final stage. 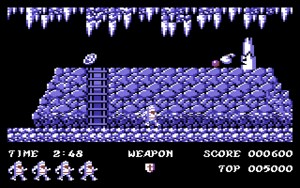 At the start of the map, you will almost immediately be attacked by zombies and bats that fly down from the ceiling. Head to the right to continue.

When you have the option to climb the ladder to the upper floor, you can use it to only take the close item but should take the lower path to avoid the Monster Tower.

As you proceed to the right and up the steps, you will encounter a Red Arremer followed by a second Monster Tower. Slip past the former, and take out the second by a jumping attack. Proceed and collect the armor. 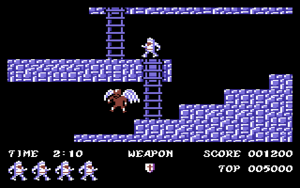 A choice between the upper and lower paths

After another Red Arremer, you will see a ladder. You can opt to go straight right for a direct path, or instead head up for safer path.

If you choose to go to the right, you may become overwhelmed by Wraiths as you try to progress. There may be as many as three at once, which may be too much to handle in combination with the layout and hostile Arremer.

If you choose the upper path, the layout may be difficult as well. While the arremer can be removed by a glitch (climb down the ladder as it moves up and down), the monster tower may not have an easily dodgable pattern; the only guaranteed means to avoid the attack is to step down onto the platform containing the ladder.

In either path, proceed right until you see the next arremer. 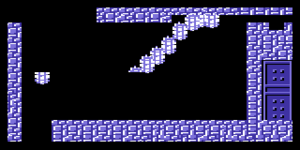 The Dragon. Note that sprites may flicker during this battle.

When you see the drop leading down that is guarded by the Red Arremer, go straight down to land on a ledge. From this ledge, jump forward to land on the ground. Be careful not to drop down from this second ledge, as it leads to a bottomless pit.

The final Red Arremer may either be dodged or slain. While the original Arremer will need to be slain to prevent you from being overwhelmed, this enemy will only stay in the local area. Proceed right to the final door.

To slay the dragon, hit it with you weapon while avoiding its movement. It generally makes wide circles, and can be defeated by destroying all segments of the dragon. It is extremely vulnerable to the shield, which takes out most of the segments and can kill the head in one hit.

Once you rescue the princess, the game loops back to the first level.

How to play
Appendices
Walkthrough
Retrieved from "https://strategywiki.org/w/index.php?title=Ghosts_%27n_Goblins/Stage_4_(Commodore_64)&oldid=436896"
Hidden category: