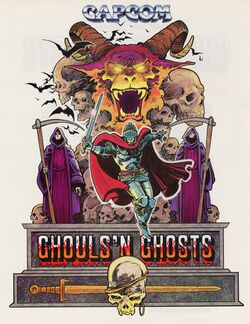 Ghouls 'n Ghosts, known as Dai Makaimura (大魔界村, Dai Makaimura? lit. Great Demon World Village) in Japan, is a side-scrolling platform game developed by Capcom, released as an arcade game in 1988 and subsequently ported to a number of home platforms. It is the sequel to Ghosts 'n Goblins and the second game in the Ghosts 'n Goblins series. It was a commercial success, becoming the eighth highest-grossing arcade game of 1989 in Japan. It was also critically acclaimed, with the Sega Genesis version winning four awards from Electronic Gaming Monthly in 1989, including Best Game of the Year.

The gameplay for Ghouls 'n Ghosts is similar to that of Ghosts 'n Goblins. The player controls the knight Arthur, who must advance through a series of eerie levels and defeat a number of undead and demonic creatures in his quest to restore all the people killed by Lucifer (Loki in the English-language Sega Genesis and Master System versions), including his beloved Princess Prin-Prin, back to life. Along the way, Arthur can pick up a variety of weapons and armor to help him in his quest. While the core gameplay remains the same as its predecessor, the game now allows Arthur to fire directly upward and directly downward while in mid air.

By jumping in certain spots, players can cause a treasure chest to erupt from the ground. By firing his weapon at the chest, players may uncover new weapons, gold armor or an evil magician that changes Arthur into an elderly man or a helpless duck. The gold armor allows players to charge up the weapon to release a powerful magical attack. Each weapon has its own special attack, with the exception of the special weapon.

There are six levels. To defeat the game, Arthur must complete levels 1 through 5 twice. Upon completing them the first time, Arthur is taken back to level 1, but this time a special weapon appears during the game. To enter Lucifer's chamber the player must have this special weapon equipped, and must have defeated the final Fly boss from level 5. After entering the final large door, the player goes directly to Lucifer's chamber.

Three years after the events of Ghosts 'n Goblins, the Ghosts have returned with Ghouls for revenge, initiating a mortal holocaust on the Princess' kingdom as beams of light struck through countless villagers. When Sir Arthur returns to the village, his rescue attempt was too soon as his beloved Princess Prin-Prin also has her soul taken away from her body in front of his very eyes. Now it's up to the heroic knight once again to slay his way to the hellish castle to defeat the evil Lucifer and his legion of demons and restore the souls of Prin-Prin and every mortal.

Ports of Ghouls 'n Ghosts were released in Europe in 1989 for the Amstrad CPC, Amiga, Atari ST, Commodore 64, and ZX Spectrum. These ports were all handled by Software Creations and all omit a great deal of detail from the arcade version.

A Sega Genesis port of Ghouls 'n Ghosts (programmed by Yuji Naka) was released by Sega in 1989 in Japan and North America, and in 1990 in Europe. This version was re-released as a handheld TV game with Street Fighter II Special Champion Edition in 2005 and as a downloadable Virtual Console game for the Wii in 2007. This version was also included on the Sega Genesis Mini in 2019. Sega also released a Master System port in 1990. This version introduced a power-up system that allows the player to enter secret shops and upgrade parts of their armor. This includes helmets, which give the player access to new weapons and magic spells; chest armor, which allows the player to sustain more damage; and boots, which increase the player's speed.

Maximo: Maximo: Ghosts to Glory · Maximo vs. Army of Zin