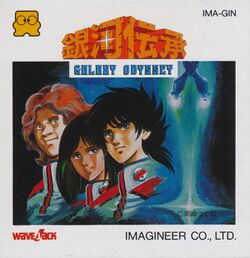 Ginga Denshou - Galaxy Odyssey (Milky Way Transmission: Galaxy Odyssey) is a game developed for the Family Computer Disk System by Wave Jack, and published by Imagineer in 1986. Unlike most games for the FDS, Galaxy Odyssey did not come with just a disk and an instruction booklet. Among the contents found in the large box, were an audio cassette tape and a book recounting the game's story.

The game itself is quite unusual as well. It features a blend of vertical shooting gameplay mixed with more Zelda-like exploration sequences. As the pilot of a ship, you could dock with certain dungeon entrances, and take a shuttle down to the ground to explore and search for items. Searching around isn't easy at first, since you run out of oxygen fairly quickly, and that starts to drain your life, of which you start out with three bars.

To win the game, you must find the medicine needed to rescue the people who are suffering from a disease in your home area. To do so, you must collect warp codes, and translate alien codes, and blast off from one dungeon location to travel to another. The game's text is in Japanese, and has never been translated to another language.