God of War: Chains of Olympus/Weapons and Magic

From StrategyWiki, the video game walkthrough and strategy guide wiki
< God of War: Chains of Olympus
Jump to navigation Jump to search

God of War: Chains of Olympus | Table of Contents | Walkthrough

The Blades of Chaos

These are Kratos's main weapons given to him by the God Ares. You will have these from the start of the game, and will be one of the most deadliest tools in his arsenal. They are a great mixture of speed and strength which can defeat a large amount of enemies in a short amount of time. 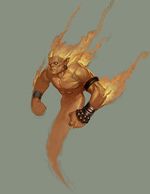 You will obtain the evil jinn once you defeat the Persian King. This is your first magic attack you will come across in the game. All levels can be executed in the air. The damage value is applied to each creature individually.

A relic of the sun god Helios, the sun shield allows Kratos to block the attack of his enemies. Once Kratos acquires the Primordial Fire, he can ricochet enemy projectiles back to the original caster. The sun shield also reflects strong beam of lights and open multiple doors.

This symbol of Triton's power gives Kratos the power to breath underwater. Once underwater Kratos can use his swim dash attack to break through obstacles. There is only one level for this item.

An intense energy born from the primordial fire, you will hurle a ball of light to damage your enemies. To change a target, use the analog stick to change targets while focusing the cast. This attack can be done in the air. Also all damage is applied to each creature individually.

A symbol of the strength and might of Zeus, the Gauntlet of Zeus is the perfect tool for destruction. This is the only weapon that can destroy certain environment settings (Walls, Chains, Boulders, etc.). Attacks can be preformed in the air.The damage value is applied to each creature individually.

Charon's Wrath in use

Stolen form the ferryman of the underworld, Charon's Wrath unleashes a ravenous force that will freast upon Kratos's foes, inflicting continuous damage. Once the force has latched upon an enemy, the viral energy may spread it's destruction to other nearby targets. Use the analog stick to change targets while fousing the cast. This attack can be preformed in the air. The damage value is applied to each creature over 10 hits and can be spread to nearby creatures who each take 3 hits of damage.