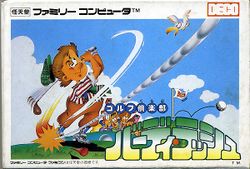 Golf Club: Birdie Rush is a golf game developed by Data East and published for the Famicom towards the end of 1987. It employs a far off bird's eye view throughout the game. It features 18 holes and allows players to play in a stroke game, or a tournament, and allows players to play alone, or head to head. It was only released in Japan, and it was followed up with a sequel for the Super Famicom called Super Birdie Rush in 1992.