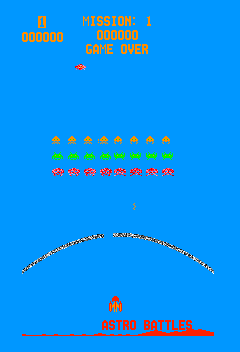 The first mission is nearly a straight clone of Space Invaders. This is the only mission set against a sky-blue background instead of in space. You are protected by a glittering parabolic forcefield, which is gradually worn away by enemy projectiles. The forcefield also works in BOTH directions and therefore it must momentarily deactivate in order for the player's ship to fire out. To advance to the next mission, the player must destroy all the invaders. 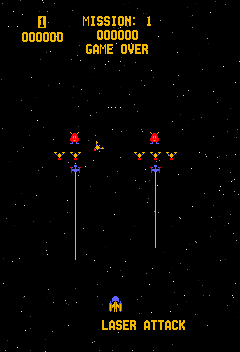 It didn't take you long to find trouble. Just outside of Earth orbit, you encountered two small squads of ships. In this mission, the player is faced with two formations each made up of five enemies. The formations are cross-shaped, and at the bottom of each formation is a Laser Ship. The Laser Ships fire a long, dangerous yellow beam at regular intervals. At the same time, the other enemies may break formation and attempt to divebomb the player. Destroying a laser gun causes the corresponding formation to break apart. To advance to the next mission, the player must destroy all the enemies. 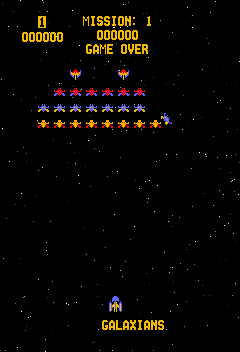 With the Laser Attack obliterated, you pushed on further into space. This mission is a clone of Galaxian but with fewer enemies (24 in Gorf vs. 46 in Galaxian). The player is faced with a swarm of galaxians, which continually divebomb and shower the player with deadly projectiles. To advance to the next mission, the player must destroy all the galaxians. 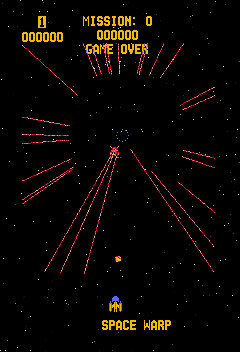 Having located the enemy flag ship, you realized that in order to reach it in time to save Earth, you must risk a space warp. Engaging you engines, you soon found yourself traveling through the tight, cylindrical quarters of a hyperspatial wormhole. The wormhole is situated in the middle of the screen out of which enemies ships emerge—one at a time—and spiral outward at increasing speed; whilst growing larger and flinging fireballs at the player. To advance to the next mission, the player must survive a number of these enemies. 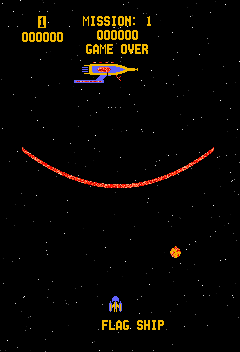 The final mission is a one-on-one confrontation with the alien Flag Ship itself. Having survived that onslaught, you reached interstellar space and found yourself in uncomfortable proximity to a fully shielded Gorfian Flag Ship. It is equipped with its own forcefield, through which the player must blast in order to get a clean shot on the ship. It is also armed with a powerful fireball weapon. The player's weapon has a minor effect on the Flagship's hull, and can only blast off tiny pieces of it. This adds to the player's problems, as stray pieces of hull can destroy their ship. These pieces can be destroyed with a single shot. The only way to destroy the Flagship is to hit the glowing reactor at the heart of the ship, either by first blasting away the hull to expose it, or by managing to fire a shot directly into the tiny vent that leads to the reactor.