Chapter 2: The Mine Crawlers Nest
Chapter 3: Artifacts of Ancient Power
Chapter 4: Xardas
Chapter 5: Guardians of the Portal
Chapter 6: The temple of the Sleeper
Sidequests (new camp)
Sidequests (old mine)
Sidequests (other)

As you start the game, you'll be given a letter that must be delivered to the magicians of fire. As soon as you can enter the castle, typically after becoming a Shadow, Rogue, Novice or paying Thorus 1000 ore, you can deliver the letter. It must be delivered to Milten. In your inventory, the item will say that the seal must not be broken, but there is no repercussion for breaking it and reading the letter.

It is important (at least if you're a shadow, untested for the other camps) to deliver the letter before you finish Secretion of the Minecrawlers. If you deliver it after that quest, Milten will take the letter in a force-dialog, Nameless will ask about a reward and Milten will reply "that doesn't matter anymore, Corristo wants to see you!". It appears you just lost your chance of getting any reward as Corristo doesn't appear to have anything special for you. Essentially, you just failed the quest. Milten doesn't even read the letter. This is why it's categorized as a sidequest. While untested, if you just drop the letter out of your inventory when the game starts (which you can do), you can most likely still finish the game without any problems.

If you deliver the letter earlier, you'll be told to obtain your reward from Torrez. Torrez will offer you a choice of rewards:

Spell scrolls are one-use and transform into scavenger isn't particularly useful. Fireball can be found in the storeshed in the old mine, lightning will be available for sale in chapter 2. Unless you have a plan for that lightning scroll, go with the potion as those aren't laying around much and will permanently boost your stats. Torrez will comment that you just picked the most valueable reward.

If you joined the new camp and Lares made you a rogue, you can ask Cronos if he needs a messenger. It so happens he does! He'll give you the messenger's amulet which gives you access to the castle which is always useful as well as a message for the magicians of fire.

Sidequest if you joined the swamp camp that'll give you access to the castle.

Gilbert was sick of the guards and decided to hide in a cave near the old camp. Everyone seems to have forgotten about him. He likes cheese. Leave the old camp using the south gate. Go right until you find a place on the rock wall you can climb and go up. You'll get some XP for finding him. 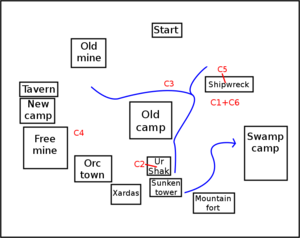 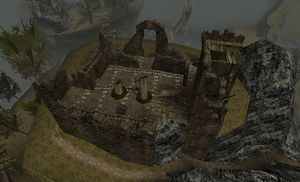 Series of 6 Chromanin books, each containing a hint regarding the location of the next book. The next book won't appear until you've read the previous one! The first book is found on the body of the Skeleton Mage Of The Fogtower, in the caves underneath the tower near the sea. (alternative entry: in a cave between the beach and the swamp camp) The second book is all the way up on the tower of the ruins where Ur Shak hangs out in chapter 4, south of the old camp. The third book is north of the old camp, the hint about dividing and reuniting refers to the river that splits and rejoins there. The fourth book is east of the free mine on the shore of the lake. The fifth book is near the shipwreck on the beach. The sixth book is on a corpse where you found the first book. On this corpse you'll also find 302 ore, an amulet of life force (maximum life +30) and 2 transform into bloodfly spell scrolls.

If you'd like a chance to earn some more XP, read the sixth book where you find it. If you're a wimp, leave the caves before reading it.

Go to top
← The temple of the Sleeper | Sidequests | Gothic →

Chapter 2: The Mine Crawlers Nest
Chapter 3: Artifacts of Ancient Power
Chapter 4: Xardas
Chapter 5: Guardians of the Portal
Chapter 6: The temple of the Sleeper
Sidequests (new camp)
Sidequests (old mine)
Sidequests (other)
Retrieved from "https://strategywiki.org/w/index.php?title=Gothic/Sidequests&oldid=849094"
Hidden category: