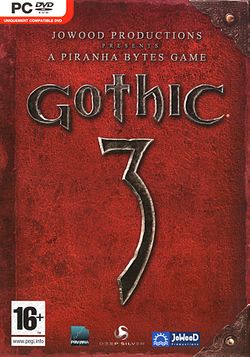 Gothic 3 is a fantasy-themed role-playing game for Windows from the German game developer Piranha Bytes. It is the sequel to Gothic II. Although widely available in English, the native release of the game is German. The game was released throughout the European Union on October 13, 2006 and became available throughout North America starting November 20, 2006. Although the US version is rated T (for teens), the version released in North America carries exactly the same gameplay content as those released internationally. The North American release incorporates two patches that appeared after the initial UK edition.