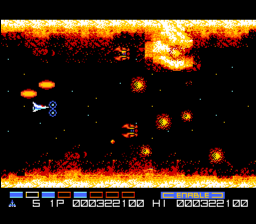 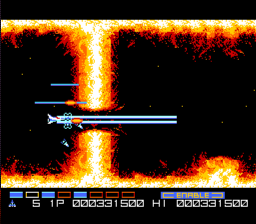 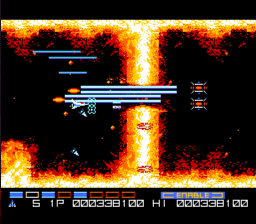 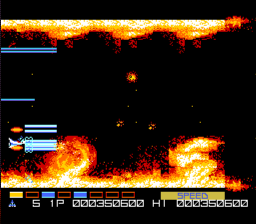 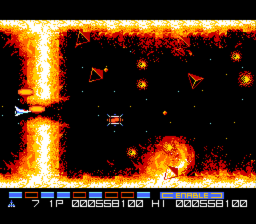 The Planet of Fire is unique in that it is the only stage to feature a new enemy on the return trip, Stage 9. The new enemy that you encounter is a creature that resembles a crystal pyramid. They bob up and down as they makes their way to the left across the screen. They aren't particularly strong, but they do possess one ability that makes them a tremendous threat: they can reflect the Metalion's laser beams back at the Metalion. In fact, you often notice the reflecting beams before you notice the crystals. Once this happens, you must be extremely cautious about firing lasers, or you're likely to be struck by the reflection. Only fire lasers as you are traveling up or down the screen. Never remain at one particular height on the screen, or you will get hit when the laser beam returns. They only appear a few times through the replay of the stage, but they appear often enough to be a nuisance. 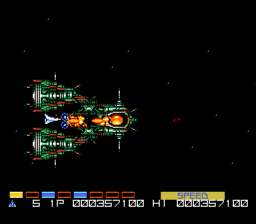 The boss of this stage is identical to the one you faced in the Floating Continent stage, so if you mastered the technique to beat it there, you can use the same one here. Stay between the two arms while it fires lightning, and then quickly back up to the left side of the screen to avoid getting crushed. Stick to this pattern and you will defeat the boss rather quickly.

Very little about this stage has changed in the remake compared to the original. The only significant alteration is, of course, the addition of the arcs of flame which leap out into the middle of the screen, forcing you to fly above or below them for safety. These arcs are inspired by the third stage of Salamander (Life Force), and suit the stage very well. There are only two of them, and the fire off around four or five times before they have progressed far enough across the screen. It's worth mentioning that the return trip through this stage also features the crystal enemies, but for whatever reason, they do not reflect your beams back at you. 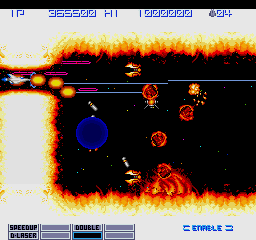 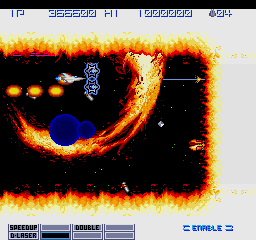 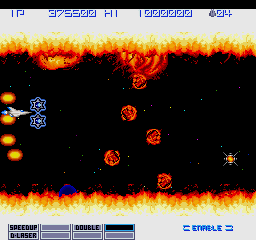 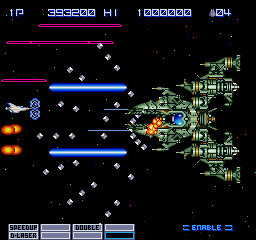 The boss of the remake is the second of two unique bosses which replace those found in the original. Rather then face a second Mayhem Ship, you face another ship whose primary form of attack are gigantic lasers. This ship has an two pairs of lasers cannons on the wings. It moves up and down and switches off between firing the outer pair and the inner pair. While a change from the Mayhem Ship, this boss isn't quite as challenging to defeat. In fact, if you are loaded up with four Options and Lasers, and lined up with the core once the ship begins its attack, you can sometimes blast through all the shields and hit the core before the ship even moves away. When invading the core, watch out for several instances of pods that appear from every corner, and cannon's situated in blind spots in the ceiling. It is recommended that you stay to the right through the invasion.