Each stage of Gradius 2 is composed of three sections: the pre-stage, the stage itself, and the post-stage boss fight. An optional fourth section occurs if you decide to invade the core of a defeated boss. 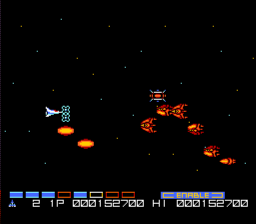 The pre-stage is a space-only section where you are free to any location on the screen without fear of colliding with the terrain. During this section, you will be attacked by squadrons of basic flying enemies, most of whom are likely to deliver power-up capsules. Capsules can be obtained from two types of enemies, the formation types which only provide power-ups if you destroy every member of the formation, and the alternate red colored enemies which always leave a capsule behind if destroyed. If you are starting with little to no power-ups, this is your best opportunity to increase your firepower before the stage begins in earnest. The best power-up strategy depends on both your style of play, and the stage that you are about to enter. Stay mindful of the highlighted position on the power-up bar. If you allow the bar to switch from Shields back to Speed Up, and you don't have shields, you may have wasted six or more capsules. 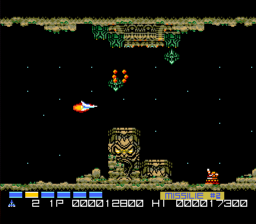 Each stage is different from one another and contains numerous unique aspects. The stages are covered in depth on their own pages in this guide. Gradius 2 is a little different from other games in the series in that after you play through the first seven stages in order, you begin to revisit the stages in reverse order back to the first stage, before you can challenge the final stage and complete the game. Note the inclusion of the Asteroid Belt and the Water Planet, which are unique to the Nemesis '90 Kai remake of the game. You will only encounter these stages on the return trip through the stages in reverse order, and you will not encounter these stages in the other versions of the game. These two stages replace the three stages between the Planet of Fire and the Collosus Planet. 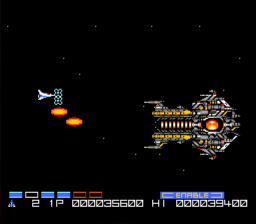 At the very end of every stage, you will encounter the post-stage boss fight. This fight consists of a showdown with a large ship whose design is based on the Big Core ship from the original Gradius. There are four different designs for these ships, two of which are encountered twice on consecutive stages. (The two duplicated ships are replaced by new ships in Nemesis '90 Kai). Note that the Life Planet features a biological boss and does not have a core. When the final core ship arrives, only the barriers directly in front of the core become susceptible to damage. You must then begin to shoot and destroy each of the barriers until the core is exposed to your weapons. Then you must shoot the core until it explodes, destroying the craft. All the while, you must avoid laser fire from its four laser cannons. The ships fly up or down depending on your position relative to it. Different ships have different arrays and levels of firepower, so it's important to assess each ship individually and choose a defensive strategy that works best. The boss fights are always easiest when you have Options that you can position in a way that lets them shoot at the barriers and the core, and keeps the Metalion out of the line of fire. Note that in Nemesis '90 Kai, each barrier generates a spread of bullets that radiate outward whenever they are destroyed. 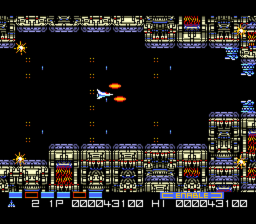 Once you damage a boss ship's core sifficiantly, it begins to glow blue. After this begins, you have approximately five or six seconds to fly through the shaft of the ship and literally collide with the core before the ship detonates. If you manage to do this, you will begin the core invasion, where the Metalion is actually transported to the interior of the ship. Once inside, you must survive the trip through the craft and destroy a final barrier that leads to the core. If you are successful, you will approach the core in an attempt to absorb a new power-up for the Metalion. If you managed to defeat the boss under 30 seconds, you will absorb one new power-up. If you defeat the boss under 15 seconds, you can absorb two new power-ups. You always absorb power-ups in the same order, regardless of which core you absorb them from. Note that in Nemesis '90 Kai, you will only obtain one new power-up, regardless of how fast you defeat the boss.