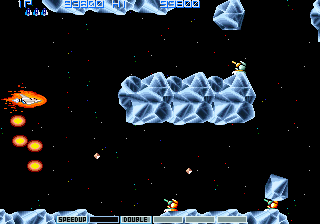 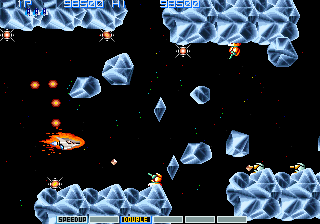 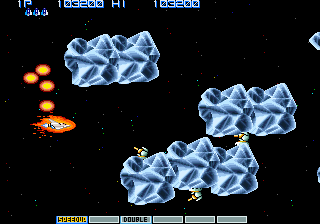 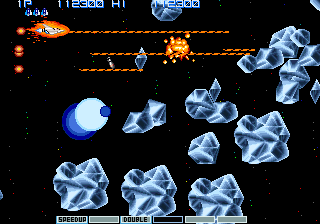 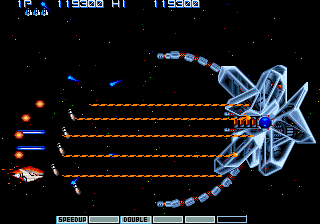 The boss of this stage has a surprise for you. When the screen is clear of enemies, and you're waiting for the boss to appear, get to the top or bottom of the screen. Unlike most bosses in the game, this one appears from the left side. Move out of the ships way, and then position yourself to confront it. Although ship is covered in a crystal armor, its weak point is the same as most Gradius bosses; the core in the center which is protected by a few barriers. This boss has two thin tentacles that it waves back and forth, firing beams in whatever direction they happen to be pointing at the time. The ship itself has two guns directly above and below the barriers. This ship tries to blast you with those guns, as well as the tentacle guns. Every now and then it enters a state where it crosses the tentacles and fires all guns continuously for a short period of time. Although this boss may seem quite challenging, it suffers from one particular blind spot. Wait for the tentacles to spread apart, giving you access to the space directly in front of the barriers, get in close and sit right in front of them. The ship won't move up or down, the guns should fire above and below you, and you can sit there and just fire at the barriers and the destroy core once it's exposed.