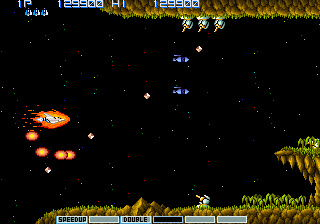 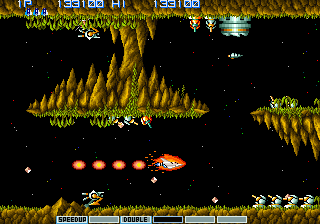 Although it's not guaranteed to show up at this time, it is very likely that if you have had four Options activated for a long time, the Option Hunter will appear. Unlike most enemies, Option Hunters are not scripted to appear at particular points within a stage. Rather, they show up after a period of time has passed, regardless of where you happen to be (with a few exceptions.)

It shows up on the left side of the screen, and a siren will announce its arrival. It will hang back to the left for a number of seconds, tracking your vertical movement, before rushing straight forward to the right in an effort to capture one or more of your Options. If it manages to collide with any of them, it will remove them from your ship and fly away with them. Once it does that, move quickly out of its way in an effort to lure the Options out of its way. However, be mindful of the terrain and any enemies. Note that the Vic Viper can safely collide with the Option Hunter. 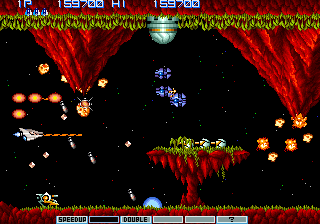 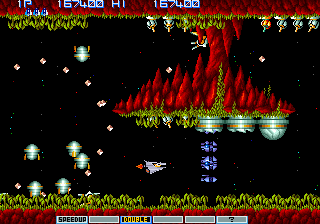 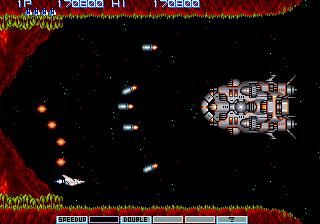 Adding to the link between this game and Salamander, the boss of this stage is an upgraded version of Death. The first version of Death was a bit of a pushover, but that's not the case any longer. Like the original, this version of Death has two attack phases, but the phase have been substantially altered. This Death's first phase is to open its front shield and launch five indestructible missiles at you. The Vic Viper is safest if you steer through the gap between the first and second missiles, or the fourth and fifth missiles. The gaps between the center missiles are too small and risky. Death is only vulnerable when the shield is open and its about to fire. Once you punch through it and expose the core, the missiles stop and Death begins its second phase. Death will fly up or down until it stops and fires a gigantic laser before resuming its attack. You have no choice but to move out of its way in order to avoid the laser. Once the laser ends, continue your attack on the exposed core until Death stops flying again and fires another laser.