This next stage of Gradius II is a bit unlike any stage the Vic Viper has ever encountered. Rather than the usual flight through a straight or open stage at a constant speed, you will be forced to pilot your vessel through a maze-like fortress at ever increasing speeds. Unlike prior stages which rely on developing a strategy to survive the predetermined waves of enemies which appear, this stage requires you to rely more on reflexes and gut decisions. As a result, it's not particularly helpful to provide a walkthrough for this level.

Although the tunnels and paths through the fortress are fixed, you must constantly evaluate the current situation and make split decisions about which way to move. You get one break in the middle of the stage, and the challenge resumes. The stage scrolls vertically, and you should activate a second level of Speed-Up if you haven't done so already. Once the stage is at top speed, you will likely be too slow to safely maneuver through the tunnels if you remain at only one level of Speed-Up.

Rather than describe the stage in a linear fashion, here are a few of the common obstacles that you must instantly recognize and react to when you encounter them. 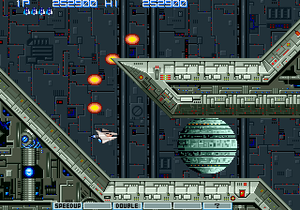 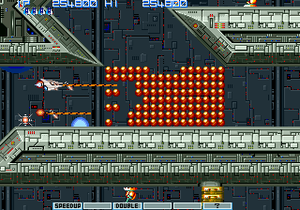 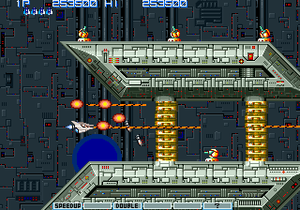 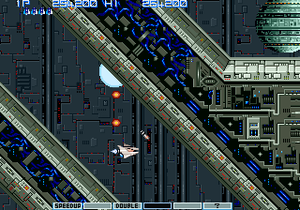 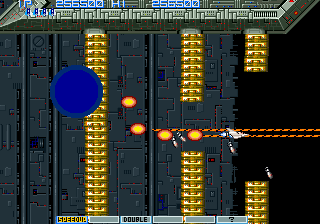 As mentioned above, there is one exception to the behavior of the gates, and that happens at the very end of the stage. Before you escape the fortress, you must fly through a wide opening which features three long yellow gates. These gates begin to close when they appear on the screen. Due to their size, they don't fully close until the gates are close to the left side of the screen. If you remain to the left of these gates for too long, you will inevitably crash into the gates. You must learn to recognize these gates on sight, and be prepared to pilot the Vic Viper far to the right in order to fly safely through the gates and on to the boss. 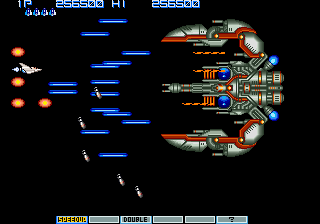 The boss that you encounter at the end of the fortress looks like a highly upgraded version of the Big Core ships that you fought at the end of almost every stage in the first Gradius. It behaves rather similar too. It flies up and down, waiting for just the right moment to stop and fire at you. When its wings are closed, it can shoot four lasers at you. However, inside the wings, it has an impressive array of guns, and fires fourteen blasts at the Vic Viper. There aren't many safe places that allow you to fly between the beams, although it's possible. When the wings are open, your objective is to shoot and destroy the barriers in front of both the top and bottom cores. When you destroy one of the cores, that half of the ship becomes inoperable. Once both cores are destroyed, the entire ship explodes, and you will advance to the next stage.