Each stage of Gradius II is composed of three sections: the pre-stage, the stage itself, and the post-stage boss fight. 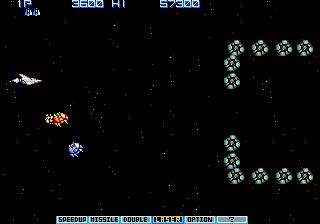 The pre-stage is a space-only section where you are free to any location on the screen without fear of colliding with the terrain. During this section, you will be attacked by squadrons of basic flying enemies, most of whom are likely to deliver power-up capsules. Capsules can be obtained from two types of enemies, the formation types which only provide power-ups if you destroy every member of the formation, and the alternate red colored enemies which always leave a capsule behind if destroyed. If you are starting with little to no power-ups, this is your best opportunity to increase your firepower before the stage begins in earnest. The best power-up strategy depends on both your style of play, the power-up meter type that you selected, and the stage that you are about to enter. Stay mindful of the highlighted position on the power-up bar. If you allow the bar to switch from Shields back to Speed Up, and you don't have shields, you may have wasted six or more capsules.

Each stage is different from one another and contains numerous unique aspects. The stages are covered in depth on their own pages in this guide. Note the inclusion of Stage X between stages 5 and 6, which is unique to the PC Engine version of the game. You will not encounter this stage in the other versions of the game, including the original Arcade version. 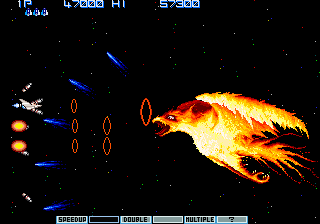 At the very end of every stage, you will encounter the post-stage boss fight. Unlike the original Gradius, which featured the same boss battle against a Big Core at the end of most stages, Gradius II presents unique and varied bosses throughout the game, some of which unusual strategies to defeat. However, a majority of the bosses follow a similar principle to the one set by the Big Core: one or more cores which must be destroyed in order to defeat a boss, and which are protected by a set of barriers which must be worn down and blasted away in order to expose the core(s) to your weaponry. Each boss will have their own particular style of attack which must be learned in order to keep the Vic Viper safe and in fighting condition. Some stages present an intermediate mini-boss fight before the real boss fight begins, and one stage in particular, Stage 7, features nothing but six boss battles, one right after another.