During space flight, you should move into position to collect your first power ups. A wave of five enemies will first approach near the top, and split before reconverging. This is followed by a second wave approaching from the bottom, which stops just at the center of the left screen before turning back right. The third and fourth waves appear at the top then bottom, and are easy to intercept if you decided to use two powerups for Speedup.

After the initial four waves, you will encounter a mix of enemies from the initial waves and individual fighters. There should be at least four more powerups before you enter the base.

This first stage takes place in a desert full of sand dunes, and, for a first level, is difficult. 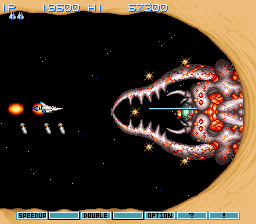 The first boss, reminiscent of an earwig, will approach once you reach the end of the base.

It follows a simple attack pattern:

It is vulnerable to shots in the center. When Goliath is about to die, it turns red. Once defeated, the Vic Viper will fly forward to the next stage.

There is hardly anything different, although there are no sand lions. Goliath is slightly different, as its small set of pinchers don't move. More than one enemy now appears at a time during the fight, making it harder.