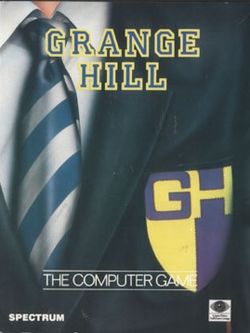 Grange Hill (full title: Grange Hill: The Computer Game) is an adventure game that was developed by Binary Design for Argus Press Software and released on the Sinclair ZX Spectrum, Amstrad CPC and Commodore 64, in 1987; based on the BBC's drama series of the same name (which premiered on BBC1 in 1978), the player must take control of Luke "Gonch" Gardener who is breaking back into Grange Hill School after it has closed for the day to retrieve his Walkman (which was stolen from the staffroom after being confiscated during a mathematics lesson), accompanied by his CPU-controlled friend Paul "Hollo" Holloway (and if Gonch wants him to follow him he must wait for him to catch up).

You really don't appear to have any choice - if it's:
1) your Mum's verbals
or
2) Griffiths, Imelda, a locked school and the horrors of the sewers then it has
to be school!
She still hasn't forgiven you for having your first Walkman stolen. It wasn't
your fault that some swine stole it from the staff room after it had been
confiscated during a maths lesson. Now she asks to see it every night when you
get home - you sometimes think that you could return home direct from the
hospital with two broken legs and her first words would be - "Where's your
cassette player?" Does anyone understand parents?
The basic plan is to get into the staff room and then steal the Walkman back
before going home to your Mum. It's going to need a little planning though and
you had better get some help too. Hollo is bound to help you - isn't he?
Problem is that he's always complaining and might bottle out at any time.
You'll just have to try to keep him happy.
The rest of the difficulties you find will be minor compared to braving your
Mum - it's all a matter of a little thought and brilliant flashes of
inspiration. There's bound to be everything you need somewhere around the
school - it's a right dump you know.
You'd better get going - your Mum is expecting you home and you can't return
any later than midnight under any circumstances.
© BBC Enterprises Ltd MCMLXXXVII