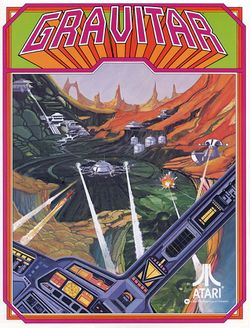 Gravitar, prototype name Lunar Battle, is a multi-directional shooter arcade game that was released by Atari in 1982; it utilizes a Motorola M6502 microprocessor (running at 1.512 MHz), with two Pokey sound chips running at that same speed. The player must take control of a blue spaceship and direct it through four solar systems by using two buttons to rotate it left and right with a third button to make it fire, a fourth one to make it thrust, and a final one to activate its shield and tractor beam - however, usage of the last two consumes its fuel (which starts at 10000), and using them both together will do so even faster. However, a regular planet can have between two and four (depending on the current solar system) blue fuel cells underneath its surface and the ship can "tractor" them up for 2500 extra units; the tractor beam's shield will also protect the ship from enemy shots when it is activated, but it does not protect it from crashing into enemy ships or the planets' surfaces. If the ship should run out of fuel, the game will immediately end, regardless of how many lives the player may have remaining.