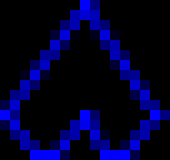 The protagonist of the game; it starts the game at its home base in the centre of the first solar system (which has the letter C in it and the text ATARI MCMLXXXII below it in the attract mode, because it was not displayed on the title screen!), from which it must travel to one of the four regular planets (which are worth 2000, 4000, 6000 and 8000 points when conquered respectively) or the larger red alien planet (which is worth 9000 points when conquered). The centre of all gravitational pull in all four solar systems is the death stars, which have no connection with the two Star Wars films and will kill your ship if it flies into them - and there are two ways to warp to the next solar system (either conquer all four regular planets, or destroy the reactor on the red alien planet and escape). From the second solar system onwards, all planets are worth 9000 points.