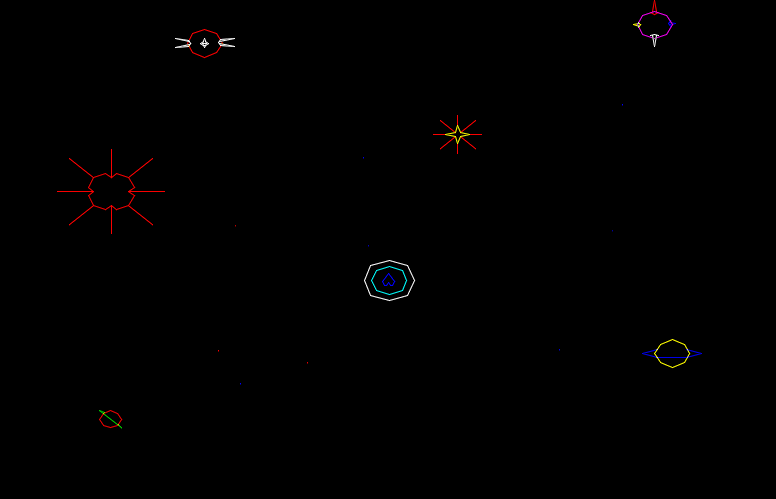 Once you have inserted your coin into the cabinet of Atari's 1982 multi-directional shooter arcade game Gravitar and pressed the Start Button, the game shall start in the first solar system with the player's ship at its home base in the centre of the screen; there are four regular planets (which are each worth 2000, 4000, 6000, and 8000 points when conquered), a fifth larger red planet (which is worth 9000 points when conquered), and a death star (which has no connection with the two Star Wars films). The last one is the centre of all gravitational pull (but must be avoided as it will kill your ship if it flies into it) - so you must direct your ship towards one of the four regular planets (or the larger red planet) instead (the numbers beside them, not shown in the image above, are the maximum amounts of bonus points for conquering them). Once your ship has flown into a planet, the screen shall zoom in on its surface; the planets have between two and eight red alien bunkers on its surface (which attack by firing shots at your ship when it is in their range, and are worth 250 points when destroyed). Destroying all the alien bunkers on the current planet shall cause the text MISSION COMPLETE to appear at the top of the screen (and you shall also receive the remaining bonus in the top-right corner of the screen when you return to the solar system) - and if your ship is too high above the surface of certain planets alien rammers (which are worth 100 points when destroyed) shall fly towards it. Each planet also has between two to four blue fuel cells, which are worth 2500 fuel units when beamed up with your tractor beam, positioned underneath its surface, but these are not essential to the conquering of them; the text SUPERBONUS shall also appear in the centre of the screen after conquering any regular planet in the first solar system with a point value below it based on the conquered planet's difficulty, except for if you conquered the 2000-point planet first or conquer the planets in increasing order of difficulty. Click on one of the images in the gallery below to see a full view of one of the first solar system's regular planets. 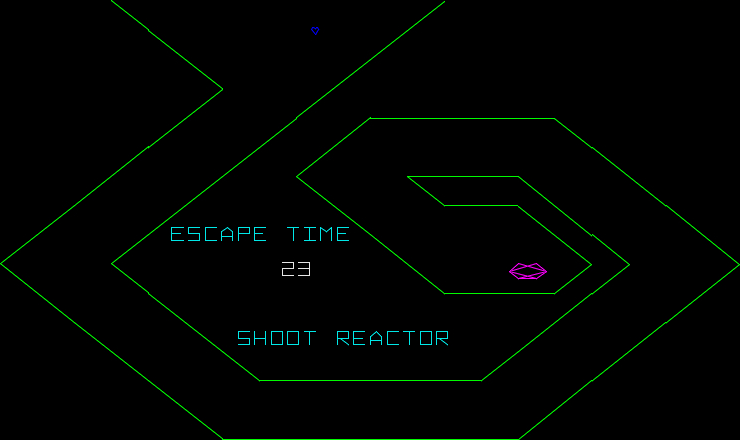 To proceed to the next solar system, the player can either conquer all four regular planets, or attempt to conquer the larger red planet (which is the base of the attacking alien ships you may occasionally see in the solar system, and if your ship ever gets too close to one, it will invoke a one-on-one dogfight with it, and only one ship will emerge the victor); its surface, shown in the image above, is composed of a spiralling tunnel with a reactor in its centre and you shall have twenty-three seconds to try and direct your ship to the centre of the tunnel (without hitting a wall), then fire a shot at the reactor to make it start glowing. You will then have to escape the planet (again, without hitting a wall) before the timer runs out - and if you do so, you will receive a 20000-point superbonus, and 7500 extra fuel units, as you are immediately warped into the second solar system which is shown in the images below. From the second solar system onwards, all planets are worth a maximum of 9000 points when conquered - and the time for the larger red one in this solar system is also reduced to twenty-one seconds (eight red bunkers shall also appear on the walls once you have fired a shot at the reactor and started it glowing). 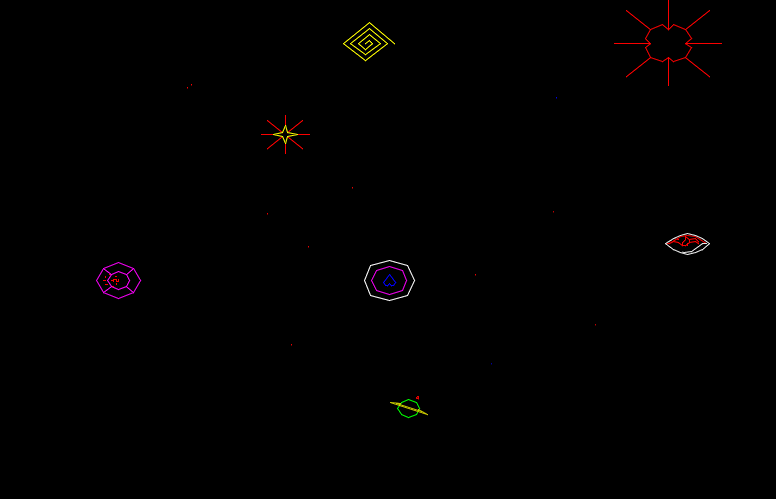 In the third solar system, which is shown in the images below, there are only three regular planets as opposed to four; the time for the larger red planet is also reduced to nineteen seconds, and eight red bunkers shall also be present on the walls from the start of it (making it harder to get to the reactor). 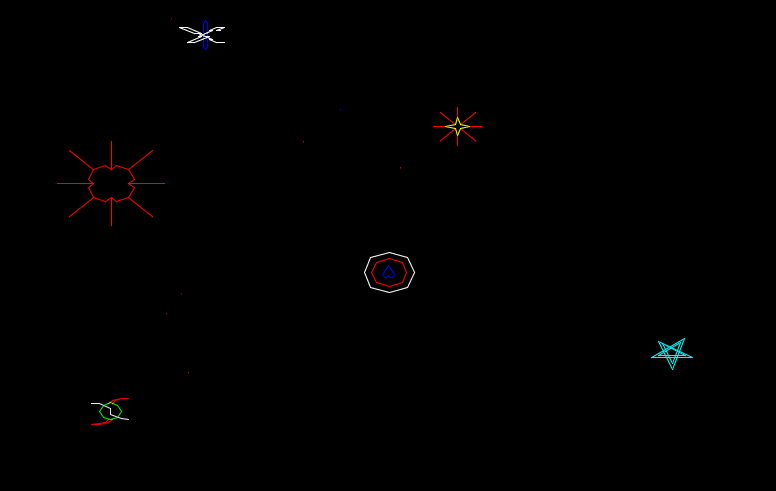 The fourth, fifth and sixth solar systems are identical in appearance to the first three, but have inverted gravitational force; the time for their red planets also gets reduced to seventeen, fifteen and thirteen seconds. The seventh solar system is also identical in appearance to the first and fourth ones, but has invisible landscapes (as do the next five), and reduces the time for its red planet to eleven seconds - and the eighth solar system reduces the time for its red planet to nine seconds (the tenth, eleventh, and twelfth ones also have inverted gravitational force). After that twelfth solar system, the cycle shall start all over again, and the game will continue until you run out of lives (or fuel, which immediately ends the game regardless of remaining lives).