During the test firing of a keyhole opening device for the Beta's newly constructed ship, the Suma, an enemy force has exploited the keyhole to reach the planet. Saruk, a Beta Commander, triggered the self-destruct on the test facility to stop it falling into enemy hands. Saruk is to establish a base and recon the area to learn more of the enemy. 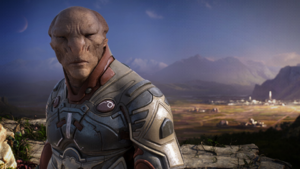 The first mission of the game is straightforward and easy relative to future missions.

You start with just a single headquarters and no room to expand. Fortunately, enemy resistance is minimal and you will not require much to win. Build a refinery - your only construction option - and construct the extractor at the nearby catalyst field. This catalyst field provides 13 catalyst per second, which will be sufficient until you unlock another area. 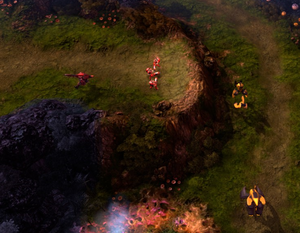 Destroy these targets of opportunity from the overlook.

Constructing a silo will be unnecessary, as tech upgrades are currently locked. The catalyst will be better spent on units. Build a factory and have it produce an endless stream of Commandos by pressing

on the construction icon in the factory's queue. Then set up a rally point by right clicking on an area outside your base.

You can set up a second factory and have it produce an endless stream of stalkers in the same fashion. Your single refinery can just barely keep up the pace with these two factories, but you can easily win the mission through raw numbers at this point.

You'll be attacked by a pair of heavily damaged Daggers. These scout vehicles ignore everything else and futilely attack your heavily armoured headquarters. A single Commando is enough to dispatch them. Repair the scratches left by the daggers and continue unit production. 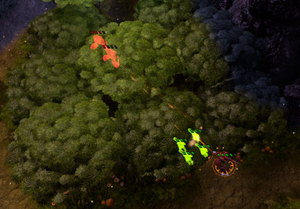 Enter the forest to spot these two Daggers.

After getting a motley collection of four commandos and a stalker or two, proceed up the path. The right path leads to an overlook that you can use to ambush some enemy forces, including an artillery piece. Destroy these targets of opportunity and proceed down the left path.

You'll encounter more Daggers, this time attacking some rocks blocking the way forward. Take advantage of these inattentive scouts and destroy them. Additional scouts will move into the treeline. Bas Barca will comment on your units' inability to see through the brush. Proceed into the brush and finish them off. Your units will glow green to indicate they are in cover and cannot be seen from the outside.

A Gladius - your toughest opponent yet - is on the other side of the treeline. A stalker or two, supported by commandos, is enough to deal with this single tank. Limited by the same rules you are, the Gladius' vision cannot penetrate into the brush - attack it from inside the brush to minimize casualties. Don't hesitate to bring up additional units being made at the base, and move your factory rally points forward as necessary.

At the far northwest corner of the map, you'll encounter additional resource fields. Saruk will comment on this site being ideal for an expansion base, which becomes your secondary objective. Construct a Small Hub near the two resource fields, and destroy the plug to make room for your refinery.

Proceeding further down the path you'll encounter a Monitor. With a lack of antiaircraft units, however, you'll have no choice but to ignore it for now. Build your expansion base with two refineries and additional factories to keep producing units. 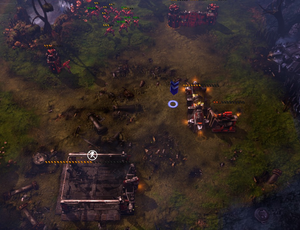 Repair and rebuild this forward base.

Follow the path through the brush and destroy the two Daggers parked inside. On the other side of the forest, you'll find a wall you'll need to destroy first. Reaching the southeast corner of the map, you'll find an old destroyed outpost being attacked by a Revolver and a Howitzer, which will take potshots at you as you approach. Destroy the Howitzer, secure the base, and begin repairing. The Large Hub has a tank attachment - build a factory on one of the hub slots. This factory will have access to Predators, which you can mount on the walls for some extra defences. In addition to a tank attachment, you can also build an Air Attachment to gain access to Cloudbursts - letting you finally shoot down those Monitors. Don't build more than two Cloudbursts, as you won't encounter too many Monitors. 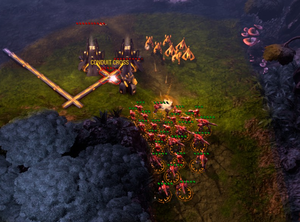 Destroy this conduit cross to disable the enemy turrets.

Also present will be a repair bay, which you'll need to build a hub next to in order to activate.

If you've continued producing units back at your home base until this point, you'll have upwards of 18 commandos and nearly as many stalkers. The enemy base lies to the north - you can simply swarm it with this force to end the mission. To minimize casualties, target the power links leading to the two anti-heavy sentinels, which will shut them down. Proceed next to the Headquarters and destroy the silos attached to it, further curtailing the power of the base. With the power gone, the enemy factories and turrets sit idle: destroy them to end the mission.