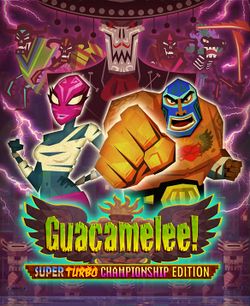 Guacamelee! is a metroidvania developed by DrinkBox Studios, and released in 2013. It is themed after melee Luchador combat, where luchador Juan Aguacate fights against an evil charro skeleton named Carlos Calaca who attacks the village of Pueblucho and kidnaps El President's Daughter.

There are three versions of the game released. The first versions are known as Guacamelee! and Guacamelee! Gold Edition, with the latter including downloadable content of the first game. The second version is Guacamelee! Super Turbo Championship Edition, which adds additional levels and makes changes in the level layout.