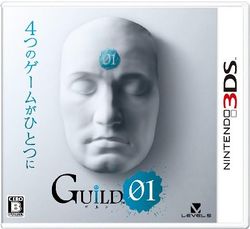 Guild01 is a compilation of four games designed by Goichi Suda, Yoot Saito, Yoshiyuki Hirai, and Yasumi Matsuno for the Nintendo 3DS and was released only in Japan on May 31, 2012. Each game was later sold individually on the Nintendo eShop and is available in other regions. Liberation Maiden was also released for iOS. Guild01 also included a demo for Time Travelers.

Guild02: Attack of the Friday Monsters! A Tokyo Tale · Bugs vs. Tanks · The Starship Damrey