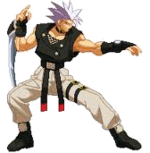 Chipp Zanuff is an American who formerly worked for the mafia as a drug dealer. This was until he ended up becoming addicted to the drugs he sold, and the mafia didn't have much use for him anymore. After a ninja saved his life and took him under his care, teaching the young Chipp about honor, repentance, and the art of ninjutsu, Chipp turned his life around and became the ninja's loyal apprentice. Eventually, his mentor is assassinated and Chipp enters the tournament to punish the people responsible.

The greatest thing Chipp has going for him is his speed. His ninja-like move set is comparable to that of Strider Hiryu's, but you should only use Chipp if he's up to your own pace. If you're having trouble against one of the other quicker characters in the game, use dashes with Gamma Blade to trap opponents. If you trap your opponent with Chipp's Gamma Blade, they'll try to get away by jumping - use this opportunity to try out some air combos and knock your opponent back into the corner. Chipp is also effective with tricking the AI - give your opponent the idea that you're going to perform a high attack, then attack low. Though taking advantage of Chipp's speed to perform feints is an effective method to mastering the fighter, try out some other techniques; Chipp's speedy attacks can create a variety of combos that can knock opponents out with ease.

Against Chipp, watch out for his dashes and anti-air attacks. Jumping over him won't work, so you'll have to guard and counter if you want to avoid his attacks.