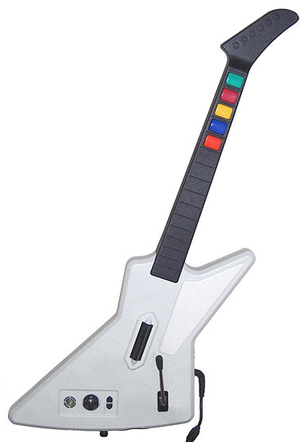 The game typically uses a special guitar controller, often packaged with the game disc. It can also be played with a standard DualShock controller. Each controller appeals to different players; some can use a guitar, some can use a DualShock, and some can comfortably use both well.

The guitar controller features five colored buttons on the fret, a strum bar, and a whammy bar. However, DualShock players use different buttons. This table details the guitar to DualShock control mapping.

, and the remaining axes of

On the menu screens, treat Green as

. Green goes forward, Red goes back, strum bar goes up and down. Simple as that. When playing a song, the fret buttons correspond to the colored notes on screen, the strum bar strums, start pauses, the whammy whammies notes, and select activates star power.