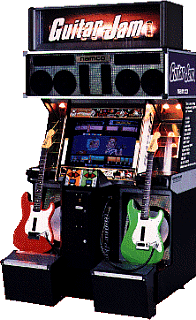 Guitar Jam (ギタージャム, literally Gitā Jamu), is a music arcade game that was released by Namco in 1999 only in Japan; it runs on the company's System 23 hardware, and the players must play two bass guitars (red for 1P & green for 2P) to progress through several levels of music, starting at easy and progressing on to hard. The first level starts off with one car, but another one is added for every level completed up to a maximum of four - and although the cars' speed appears to increase as the game progresses, it is only an illusion. As with the two X-Day games (1993-1995), and Angler King (1998), not much else is known about this game due to the fact it does not work properly in MAME.