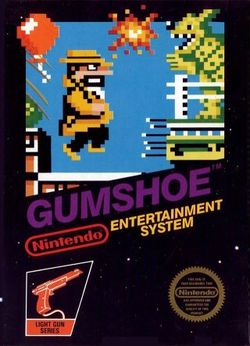 Gumshoe is one of 6 NES games made by Nintendo that requires the use of the Nintendo Zapper. It was released in the US on June 6, 1986. It is one of the first games ever released for the NES outside of Japan that was not released for the Famicom in Japan. The exact reasons for this are unknown. But it is clear that none of Nintendo's later light gun games were released in Japan either, indicating that light gun games did not sell as well in Japan. Why they decided to stop with this game might be because for such an early game, it was too expensive to produce as it was a massive 160k, over twice the size of all 3 of the 24k Nintendo light gun games made at the time, Wild Gunman, Duck Hunt, and Hogan's Alley or 4 times the size of the 40k Super Mario Bros. It was also released in arcades using Nintendo's "Vs." arcade hardware system as Vs. Gumshoe. The player must help Mr. Stevenson, a former detective, rescue his daughter Jennifer, who has been kidnapped by a mafia boss, King Dom. Jennifer is being held for ransom, and Mr. Stevenson must retrieve five Black Panther Diamonds within 24 hours to give to him.

The game takes place across four stages; City, Air, Sea, and Jungle. Each stage has a diamond positioned at some point along the way. The fifth and last diamond has been eaten by a monster named Zulie, which Mr. Stevenson must defeat at the end of the Jungle stage in order to pay off King Dom and rescue his daughter. The game then repeats from the very beginning at a harder skill level, finally adding the bullet obstacle.

Gumshoe features no saves or passwords and 3 lives. The game does feature infinite continues though, as indicated in the manual. Without this feature, the game would be nearly impossible to pass.

Stevenson will lose a life anytime he collides with an obstacle, falls down a pit, or runs out of time to complete the stage. It is difficult for Stevenson to reach the end of any stage without dying, let alone make it all the way to Zulie at the end of stage 4 and then defeat him. Drinking a potion from a Lucky Bird will make this easier, but they are very rare and will really only be useful on the first stage's optional area, where 5 appear. Players must not only keep Mr. Stevenson alive, but must also monitor the number of bullets remaining throughout the course of the game. Balloons replenish bullets as having a lot bullets is essential for the final battle with Zulie.

Mr. Stevenson walks continuously to the right. The goal is the get to the end of each stage by keeping Mr. Stevenson from dying. If Mr. Stevenson does die, there are a number of continue points on each stage where he will continue from. In order to jump over obstacles or pits, or to reach higher pathways, the player must shoot at Mr. Stevenson. He can jump multiple times in midair if you continue to shoot him. You must also shoot any enemy that threatens to collide with him. The world is laid out like a platformer, reminiscent of the look, layout, and graphic quality of Super Mario Bros..

For each stage, there is an optional area that can be reached in the middle of the stage. These areas are never mentioned in the manual. You know you've reached one of these areas because it is always is filled with lots of balloons and/or lucky birds. To get to the optional area of a stage Mr. Stevenson needs to pick up 20 balloons before getting to the area. It's absolutely essential to make it to this area in the last stage if you have started your game on that stage or you will not have enough ammo to defeat Zulie.

Rarely, Lucky Birds fly above Mr. Stevenson. Shooting the birds reveals either a roast chicken (collected for bonus points) or one of 3 power-ups (most likely a Power Drink). If Mr. Stevenson catches them, he gains special abilities, signified by the color of his trenchcoat. For example, if Mr. Stevenson's trenchcoat has changed to pink, he can absorb one hit and survive. If he get's 5 Power Drinks, his trenchcoat will turn green.

Unfortunately, the wording in the manual for how to continue is unclear, leading to a lot of confusion. The correct way to continue is to simply shoot any of the letters of the word "GAME" or "OVER" when the GAME OVER screen is shown. You get one chance to do this. If you miss, you have to start from the beginning, so it's suggested that you put your Zapper up to the screen. Don't shoot the area between the words!