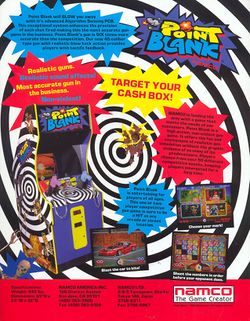 Gun Bullet (ガンバレット, Gan Baretto), released as Point Blank in the United States, is a first-person shooter arcade game, that was released by Namco in 1994; it runs on the company's NB-1 hardware, and is the ninth game from them to allow scores that do not end in "0". It's also the first lightgun game from the company in which the guns are not mounted to the front of the cabinet but placed in holsters (similar to the ones on Nintendo's PlayChoice-10 cabinets if they contained Wild Gunman, Duck Hunt or Hogan's Alley) from where the players must pick them up and direct their crosshair cursors around the screen, and squeeze their triggers to fire shots at it (they must also fire off-screen to reload them, a practice that would later be reused by the company for their own Time Crisis in the following year) - and there are also four different difficulty levels to choose from (the first one only has four stages, but the other three have sixteen each, so it is advisable to start from the first one and work your way up). The game was also later ported to the Sony PlayStation in 1998 (four years after its original release).