All game modes require exactly two teams with equal amounts of players on each team. There is the red team and the blue team.

Note: The balls can fuse together into one ball with all the abilities of each single ball.

Delay is the number you see beside your name and the other players' names in the player list on the lower left side of the screen in the game. Delay determines the order which players get their turn. Shot1 has the least delay. Shot2 has more delay (Except for J.Frog, Shot1 and Shot2 of this mobile has the same delay), and SS has lots of delay. Every second it takes to take your turn, 10 is added to your delay; except for Turtle, that gives 12 delay per second.Items can give lots of delay, oftentimes more than SS. You need to know how to use delay in order to win, especially in 1on1 fights where you are very close to the other player.

-Upon using Dual and consuming 5 seconds to calculate your attack-

On the next turn, you will still move ahead of your opponent. On this turn, why not use Dual again and finish him/her off?

Items let you do extra damage to your opponent, or help you win in some way. Each item has a certain amount of delay (one of them doesn't) added to your shot. To select your items, click on the items button in the game room. There you can fill 6 item slots. Some items fill 2 slots, some of them fill 1 slot. Some of them might be grayed out, which means you cannot select them. The host decides which ones can and can't be used. If you are the host, just right-click on the items to turn them on or off. 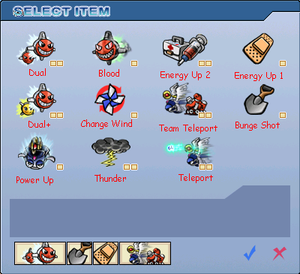 The moondisk changes every round of turns. It is located around the bottom-right of the screen in-game.

Certain shots will give you extra gold and/or GP, and sometimes take them away.

If you leave the game while it is still going, you will automatically give each player on your team 100 gold, however you will not lose anything.