The third dungeon at Potato Ruins is where you meet your first real challenge. You run into the Prince of the Phantoms at the start. You can't get to him, but he mocks you and tells you that he has captured one of your friends. You are certainly no pushover, bring it on!

After the initial cut scene, you appear at the entrance of the Hall. There are two presents at each side, one contains chocolate and the other a cookie. Take what you can, smash the statues for added coins and walk on in. You will find Pierre, your French friend, trapped within and you make your dash across a fragile walkway. Pierre tries to warn you, but obviously in French which you have no idea about. You barely just make it, but then out comes Big Bob. 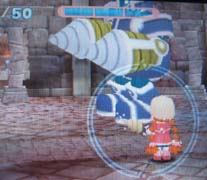 Bob is the first boss, and this is one of Prince's henchmen who you saw in the earlier video clip. He can be devastating with his armour drill. You can't hit him normally until you remove his armour with a charged drill attack. From time to time, he will run towards his armour and recover it back, so dash up to him with charged drill as soon as that happens.

He does have a few signature moves of which you need to take note. 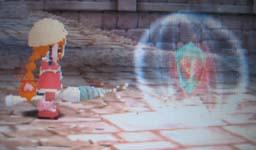 You receive a Life Gem!

The fastest way to beat him, is to hit him repeatedly as soon as his armour is off. If you have three full bars of drill energy, your attacks will deal him high damage. Once you are down to two bars, it will get challenging. Use the Tornado Drill skill often as well, and remember that repeated attacks do bring back your drill energy. If you do not have the helmet on, then the damage can be really high. Watch your life-bar and eat your cookies or chocolates if you have to. Do not fall off the cliff, as you will lose the battle and start all over (with half your life if you are in Normal mode). No point doing the forward slash attack, as it's cumbersome and really difficult to aim. He has a lot of health points but is not impossible to destroy without healing. Once you manage to vanquish him, you will receive a life gem.

After exchanging some niceties with your friend Pierre, he will hurry back to the village. The Prince reveals himself again with the talking butterfly Mosby, but no one really knows what he is talking about. Hurry back to town to find that Pierre is in Grandpa's house – he couldn't find a place to sit. You give him his couch back and two more places will appear. Talk to him again and the potted plant goes back to its rightful owner as well! With more places to visit, it's time to move on!