First up you come to that weird looking Skull-face signpost again – not one, but seven of them. Apparently, it is some kind of puzzle that you will need to solve to get through. The one in front asks for the password, while the rest provide the clues. The password might change from game to game, so you will need to learn and study the clues. To help yourself, you can write the clues down in a diagram, like so:

Each skull might give a clue about its own part of the password or where the next part is coming from in relation to itself, or both. Using the example table above, this is the process you would follow:

Follow the sequence and you can solve the puzzle with any password. However, if you want to be lazy, or you're feeling rich, you can keep speaking to the skull in front until he gives you a clue for $1,000. Prompt him further and he will actually reveal the password!

Right at the entrance, you will see two jars. Continue on and two more jars line the step below. The hallway opens up to be quite huge, and you can see all the way across the vast room. In fact, Kilometer Path is again the exact replica of Nanometer Shrine backwards! Look to your left and you will see a very long hallway and a phantom at the end of it. If you step down, the phantom sets off a trap. Five balls of spikes will come up and down the hallway. If you wait awhile, the balls will come and go at different speeds, and after a while and you can navigate your way easier.

Pass those balls and approach the phantom. He will make a dash through a little hole in the wall. It's a weak wall, so smash through it! From the edge there, you will see the phantom waiting below, and on your left you see a lever. Drop down and the phantom once again runs farther below. With him are two other phantoms carefully hidden just below the step. Get down there and kill all three of them. Now head towards that lever you saw and pull it. It will open the gate on the opposite side of the room.

Head back past those spike balls. Once safely atop the platform, look right to see a chest. You can't quite jump to it yet. But try anyway and you will fall down below, where you will find a statue hiding a lever and a weak wall. Smash the wall for coins, then smash the statue so that you can pull the lever. A blue platform will appear before the lever. Ascend the platform towards the chest and grab your goodie. Its a cookie! Head towards the exit and clear the pesky red spiders. 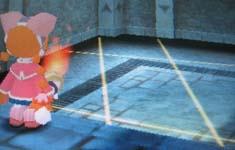 In the next room, do not jump down first. Take a while to notice that the platform below is a scene taken out directly from a James Bond movie, with all the laser traps. You can't use

-dash across these, so take your time to navigate through. Don't worry about getting zapped here a few times, as the ladder ahead brings you to a healing portal. 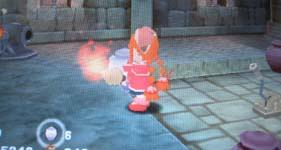 From the healing portal, turn to your left, but beware when you enter the next room, as there are three cannons from the corners blasting across the room. Charge your drill before going in, head left immediately and destroy the cannon at that corner. Follow the perimeter of the room clockwise and destroy the other two cannons. You may want to recharge your health before pulling the lever in the middle of the room. 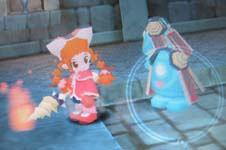 A phantom follows you.

Pulling the lever not only opens up the gate in this room, it also attracts the attention of three kung-fu phantoms! Attack them with a charged up drill and then perform one or two tornado drill attacks and they will all perish. Beyond the gate is a weak wall which will need to be drilled into to get access into the next room.

The next room may look familiar to you: short gates line your path at both sides and huge rocks are at the other side of these gates and ahead of you is the exit. When you approach the exit, two lovebird phantoms come into the room and notice you. Again, these are not that difficult and a few combination attack moves will do it. There's a mould for your drill energy in the center of the room. Proceed to the next part of the map after smashing the two jars at the exit.

You will be faced with a phantom firing at you immediately in the next room. When you approach from the side, the phantom will be alerted and two others will join in on either side of the room. The phantom with the cannon will try to point his weapon towards you, so it is a good idea to dispose of him first. The other two can deal substantial damage, so make sure you knock out their weapons. There are two weak walls at either side of the room. 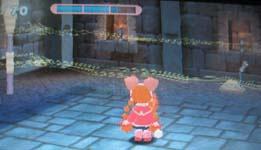 One of the weak walls leads you to a room with two electrical traps (there was only one trap in Nanometer Shrine). Destroy the stands at one end to destroy the traps. The lever at the end opens the gate in the previous room. Exit this room and head for the opposite weak wall. Beyond this wall, there is a chest right in the middle of the room and nothing else. There's a chocolate in the chest! Four spiders will appear as soon as you open the chest. Of course, at this stage, they shouldn't pose much threat to you. 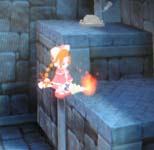 Secret lever at the top of the stairs.

The next part resembles the first part of Nanometer Shrine, which means the end is near. Steps line the sides here and at first glance there is nothing special. Jump to the top and you will notice levers on either side. Pull on both levers and a secret chest appears in the middle of the room! Even if you wear Cat Ears, the chest count will only appear at this time. There's a mystery bag in the chest. Head towards the exit and four green cube monsters will fall from the sky for you to smash up. 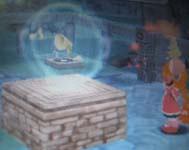 You got a Phonograph!

Head out to the beautiful scenery of the ruins and claim your prize for completing the map: a Phonograph! It belongs to Poco. Head back to town to open up more places. If you haven't done so, you should use up some life gems too, as each give you 10 more life points.