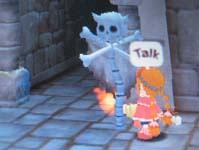 This map is lower in difficulty than most, so it will not take long to complete. Also, it is the exact replica of Meter Corridor backwards, so you are going to find most parts of the map strikingly familiar. You face a strange skull post at the start of the map and you need to show him your powers to proceed. Just do a tornado drill attack or any other to convince him.

Next up, you are in a little room with a hole in front and a long ladder to climb. Whichever way you take, you will come up to a place with two statues at each side. Smash them for cash and continue on. The passage takes a right and another right and you will be faced with a little water feature, just like before. This time there are four fish in the water. Wear your goggles and navigate yourself to the other bank. The close door in front will open revealing four cute block monsters.

Destroy them and continue down the long corridor. There are eight jars here before the long stairway down. Beware of a gap in the stairs, as it drops down to a trap (with two spiked balls). When you reached the bottom, you will reach a familiar squarish place. At each corner, there is a torch. If you light up one, phantoms on wheels (a total of four in all) will appear! You have to be quick to dislodge them, or you'll be squashed! Light up all four torches and the gate to the next room will open. 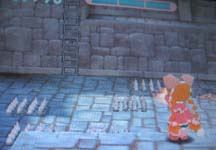 The next room has lots of spikes on the floor, but there are no phantoms around to bother you, so navigate yourself to the ladder and climb up, then head to the end of the very narrow beam to get the junk in the thrash can. Walk back down the beam and you will see a floating platform. When you step onto the platform, another will appear. You will have to cross platforms fast before the previous one disappears. Keep doing this until you reach the other side with a lever. That will open the gate to the next map.

You will be led down a corridor. If you look closely, there's a weak wall on your right. Once you smash through this wall, a phantom will appear (even if you miss the wall, the phantom will smash through it and face you). This phantom is by no means easy. It shoots lasers and spins towards you very quickly. It also floats above you, which makes it difficult for you to smash its guard and defence. Once you manage to smash its defence and hurt him with special moves, your best bet is to continuously do so while it's stunned.

There's a chest in the next room with a chocolate in it. Apart from that, there are four easy spiders. Clear the map and head up the long flight of stairs. You will come up to three jars first before meeting up with some Chinese gongfu phantoms! They are not tough and you can use your forward slash attack to kill them way before they make their way to you. The next room has nine jars in the middle, a just reward for your troubles.

Head to the next opening and when you come upon the exit, you'll be stopped by some thug phantoms! The ringleader wants to get fresh with you and he is even holding on to a laser gun! Destroy their egos and vanquish them, then head out to claim your prize. It's a Table! Head back to town, as this table belongs to Pierre.