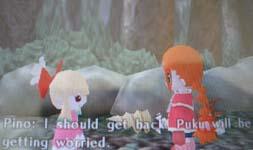 Pino gets lost in the woods.

There are a few options at the main map, but eventually you'll need to visit Radish Woods (Cheery Forest Path). As you arrive, you'll be surprised to see Pino there, and she's quite lost. With the phantoms lurking around, she really should not be venturing out in the woods. She hurries off and you'll see a dugout below some trees before you proceed forward.

The clearing in front shows a crate a little to your right and a step in the middle. 2 jars line a little gate right ahead. Remember how to push a crate? Do that onto the step and smash the tree on your left for a little more cash. The gate opens.

The path ahead makes a little right and when it clears, you will see four smiling creatures alongside the pathway. They mumble some language unknown to you and will not attack unless you hit them first. Kill them if you must, not forgetting the jars, rock and firestand as well. Follow the path up ahead as it bends left to another clearing.

At first glance, this is a pretty nice place, with a little mould on your life to level up your drill, rock and pillar with a few jars to smash. But upon closer inspection, you will notice four hidden blue phantoms with leafy camouflage on their heads. Approach them and they will spring into action! Blast them with your charged up drill and collect some junks. When you are done, continue down the path.

A gate closes behind you and you see trees on your left and right before a river. There is a bridge in the middle with a boulder on it, a step in front of this bridge but no crates in sight. Go towards the left and you will see a pretty waterfall with a weak wall behind it, smash it for some cash. Approach the bridge from the same riverside and smash the boulder. When you cross the river, you'll see a glowing red platform, and stepping on this will magically produce a crate!

Beware though of two phantom trees once you cross the river. They will spring to life when you near them. They will crash onto the ground and throw you off your feet. Their bombs are dangerous as well. One good way to engage them is to shoot them from a distance. Your drill energy should be full with three bars, this allow you to shoot from your drill. Kill these two trees before smashing the other trees and jars around you. There is also a weak wall on the right-hand side containing some more coins. Another thing you have to take note of, is not to fall into the river. Without good goggles (level 2), you will receive between two and four damage if you fall in. You can always jump out though. To open the gate in front of you, push the crate across the bridge and onto the step.

The path ahead bends right to reveal a mould! BE careful here, as smiling face monsters will fall before you at this stage. There are four of them dropping one by one from the sky. Attack them after you sidestep their fire attack. Not to worry though, there is a healing portal coming right up.

Some steps take you down ahead, and a phantom resembling a target dart-board will appear up ahead. It looks harmless as instead of coming towards you, it just shadows your movement to the left or right. Don't let it take aim though, as its laser will take more than 10 HP off you! Destroy it from the back, before coming back to see a trashcan! Remember when you felt like smashing one back in town? Smashing this one gives you a few pieces of junk!

Walk to the edge where the sign is. It mentions something about using targeted attacks. It's a clue about how to cross over the other side. Do you remember those floats from earlier on? Jump, and when the target changes color, attack. Jump again and repeat. Attack two more times, and you are through to the other side. Follow the little path on the left to see two little lovebird phantoms engrossed with each other. There's a chest in between them. Ambush them and open the chest. It's a Mystery Bag!

At this point, you will alert two other, stronger phantoms. One has fire power and the other shoots ice at you. Use charge attacks and Forward Slash on them. Smash the four jars in the room when you're done. Get back to where the floats were, drop down below and follow the bend to the left. The path drops down and you will notice a weak wall in front. Smash it to reveal a path upwards. Walk up and you will see two jars on each side of the gate with a lever slightly before that.

The lever is a trap - you get knocked to the ground, but fortunately receive no damage. Behind you now appears two phantoms though. These two have horns and charge forward faster than most. Try to kill them fast when your drill has full energy or it will present a tougher challenge. Killing them will open the gate in front and reveal the path ahead.

Walk right through and claim your prize for beating this quest. A beautiful couch! 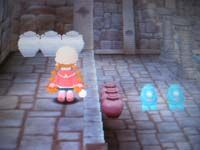 New phantoms in this area.

With a little more gold, it's a good idea to head back to town and talk to Cylinder. This time learn the Tornado Drill attack. It's worth every bit of its 1,000 price tag as it's easy to master. Getting back to the map, you'll realize that after every successful quest, you actually get a score card of how you fare. If you manage to kill all its phantoms, as well as find all the jars and chests without dying once, you'll get an A+ or even a S score.

You get medals for finishing with a good score: there are gold, silver and bronze medals, and you can exchange them with Grandpa or Hyperbolic for some great items! Navigating back to Potato Ruins, you'll realize that there is no grading score there... you'll have to complete the quest again! Go through the the map, and sequence is exactly the same, except for two new phantoms, which are pictured in the screenshot. Of course, you'll also get a different reward at the end... a Potted Plant!