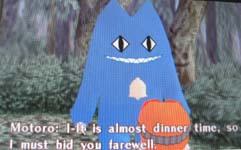 At the beginning of this part of the forest, you will once again feel the presence of Motoro the Cat. It seems that he has been following you around a lot. He runs off, leaving you at the entrance with four pillars. You will notice two fire-stands in front, the one on the left is not lighted and a gate prevents you from going farther. Remember the fire part you found? Equip that and use your drill on the left fire-stand. The gate opens like this is the key to the dungeon!

The path opens up to a T-junction. Smash the jars here, and you will notice that the entrances to the left and right paths are lined with swinging traps. Go to the one on the left first. They are easily avoided by pressing

. Next up is a square-like clearing with a chest on the left and a mould on the right. Watch out for the trees as there are two Tree Monsters in this area! Try shooting them from afar. The chest contains a yummy Chocolate! The gate in front cannot be opened for now, so once you are done hacking every tree and stump, head back.

Back to the T-junction and across to the other path. This time, there are two pendulum traps which can be avoided just as easily! The path takes a left turn and splits left and right, and it's narrower here. Take the left path first and rounding the bend, you will notice a weak wall on your left, which you can drill for some extra cash. Continue round the bend and you will see a gate on the left with a jar there. The path now takes a right and you will see a mushroom head phantom up ahead. He will attempt to run away, but you can actually kill him before he disappears into the weak wall by his side! 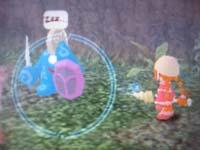 Give chase and smash the wall that he disappeared into, although you know it will most certainly be some kind of trap. First thing you will notice is that inside, there is a sleeping phantom guard! You can get close enough to knock him out without him knowing! Still, he can be tough, so hit him hard and fast, making sure you knock out all his equipment (shield, headdress and sword). Once done, smash all the other bits here and pull the level towards the upper part of this map. This will open the gate that you just saw (with a jar beside it). 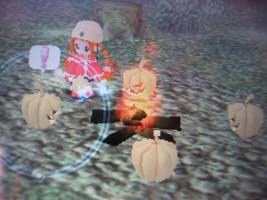 Head for that gate and you will come to a huge clearing atop a platform. There are numerous trees here, and a visible well in the center (there are actually two wells here). If you walk slightly forward, you will see a red spider in front, and he will drop to the bottom of the platform and cannot attack you yet. Just a little from the bottom, you will see four pumpkin face monsters having a nice chat. Drop down and dispose of the pesky spider. You will realise that the four monsters do not attack you. You are free to clear all of the other trees here first!

It's easiest to stand right in the middle of the fire and perform a tornado attack, which will kill all four pumpkins at once. Four more will immediately drop from the sky though. Beware of their fire attack! When you are done, head to the well and jump right in! You will fall below and find somebody's piggy bank! This is not some secret item though, it just contains quite a decent bit of coins. Smash the three jars at the opposite side. Now, to get out, look for ledges at the side of a wall. When you get to the topmost ledge, it's actually a weak wall. Smash it, clear vases along your path and work your way round to a ladder.

Once out of the new well, you will notice a healing portal beside you. Great timing! This is exactly the same place as the other well. Head to the opposite platform, smash the two jars and drill through another weak wall to continue. The path bends to the left, and before long, you will see a gate on the right. Move on ahead round the bend on the left.

Right at the entrance, a block of what looks like tree-trunk blocks your path. There are three Plant Monsters to your right and a crate to your left. Clear these weed like plants (they drop bombs but do not really pose a threat). Beyond a boulder, there is a weak wall with more coins inside. Once you drag the crate across to the platform step, you will open the gate on the way here. If you follow the path ahead, you will come up to the gate which you saw at the beginning (first left at T-junction). This gate cannot be opened, but you can see a chest right up ahead (the one that contained the Chocolate).

Now backtrack to the gate and move forward. The sides are lined with pretty gates and towards the exit you will notice two fire-stands. You may want to smash those fire-stands, but it's a trap. You just have to smash any one of them and out comes a challenging Phantom (a rotating Power Ball). He is indeed fast and you have to charge and move around, getting close enough to him once he finishes spinning to knock out his armoured gear. Once that is done, he is still a threat, as he shoots transparent lasers at you, which can deal quite a bit of damage. Use the same strategy, coupled with some tornado drill and you should be fine. Once he is dead, the gate will once again open. 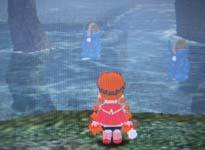 Phantoms in the water.

The next few sequences will get tougher. You come upon a little man-made lake at the end of a clearing. Watch out for two fish in the water. It's a good idea to put on your goggles now. You can see that the clear water stream stretches beyond what you can see in the middle. There is a landing on the left of this stream. On the right of the screen, the platform is too high for you to reach at the moment. Clear the fish by doing jumping targeted attacks. Swim towards the left bank. Once you land, two phantoms will drop from the steps above. They are fast and do spinning attacks towards you. Dispose of them and smash the jar on the steps.

Look to your left and you will eventually see a floating step descending on the side of the bank. Step up and wait for it to float forward. Enjoy the view, and you will come up to a stationary floating step. Walk across or jump once the two steps touch. Wait on this second one until a third one approaches. The third one will take you to a grand stage in the middle of the lake with four pillars.

Take care here, for once you light up the torch in the middle of the pedestal, you will not only bring up the steps on the opposite sides, you will also set off an alarm for three blue men to charge upon you. They look like the previous ones and charge or roll towards you. Use tornado drill and charged up drill attacks and run around the small space here. It's a good idea to clear the pillars and vases first. If you get badly beaten, eat a cookie or a chocolate! 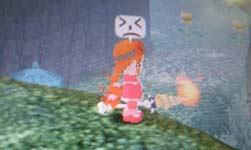 Go back to the beginning of the lake. The new raised steps can now be seen on your right. Jump up and towards the new platform, using the mould on the left to charge up your drill if you have to, and head towards the right. The road drops down below to a thrash can and two monster plants. Beyond the plants to the left, the road opens up to a target board, but there's electricity traps blocking your path! Do not stay in one spot for long. Move quickly behind the target board by pressing

a few times! You can then slowly attack it from behind. 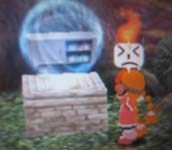 As soon as you destroy the target board phantom, three other phantoms will be alerted and appear in front of you. They wear sombreros and move just like the previous three. If you are low on health, pump it up and kill them using the same method as before. You can disable the electricity trap by charge drilling the source at each side. These are the last of them, so clear the remaining trees/rocks and move up ahead to claim your reward. It's a Shoebox! Head back to the village and talk to Poco, to find that it belongs to him!