It's time for another challenge. Head right up to meet the second boss – Mosby the Butterfly! Right up at the initial screen, you'll once again see the Prince. As expected, he has kept another of your friends here and you'll have to defeat the puny butterfly you saw during the last cut scene of the Prince. No time to lose, as you charge right at him immediately. The Prince taunts you to defeat the Lord of the Forest.

The scene ends and you can smash all the fire-stands before going in. If you have a helmet, wear it! Once in, you realise that they have captured Rocko, Poco's dancing friend! Mosby stands in your way. As usual, he talks in a language that you totally do not understand. Parin then asks Rocko to translate, which results in some slapstick comedy. Mosby decides to do the translation himself and before you know it, angrily transforms himself into a gigantic butterfly!

The fight against Mosby is by no means fair. For a start, he can fly and you can't. That means two things: all the skills that you have learned so far cannot really be used against him, as they're all ground types (except jumping targeted attacks), and you will somehow have to get to Mosby to hurt him.

You will notice slabs of round blocks appearing from the ground. At first glance they seem to be there to help you get to Mosby. The truth is that they are really difficult to maneuver around and not worth your time. Mosby has a variety of devastating attacks which include charging at you, shooting large lasers, and making fireball meteors appear from the air. Also, from time to time, three phantom bats will appear and create something like a stairway to Mosby! They are there actually to help you!

when the target changes colour. Avoid all attacks from Mosby as much as possible, but still try to get close enough to him to execute this. Once the bats appear, use the lowest one as your targeted attack first point. Jump, bat target changes to red: attack. From the first bat, jump to second, colour change again: attack. Do this until you reach Mosby himself. Usually you will only get a maximum of two shots at Mosby here, then he will attempt to escape and fly off to the opposite side of the clearing. Give chase! This is when he is flying lower than normal.

You can now jump and reach him. Repeatedly hit him using targeted attacks here. With practice, you should be able to hit him at least five times! Mosby's attacks will intensify as his health decreases, but using the same strategy is fine. Keeping your drill energy up is crucial in dealing him heavy damage. And of course, eat that cookie or chocolate if you have to. Eventually, he will fall, and you will receive a Life Gem!

You will get to see the two remaining henchmen of Prince conversing and Cream tells the story of how the Phantoms' kingdom was destroyed and a clue as to how they came to this world. Rocko tells you that the Phantoms want to rebuild their old kingdom again, and then thanks you for saving him. As usual, there is some light-hearted comedy here with Parin. That's it, you've defeated the second boss! 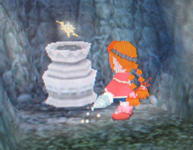 Before heading back to town, walk to the other end of the map, beyond Monster Village and look for Asparagus Lake. You will see Bob taking a breather – no fight this time, just a friendly chat. Wear your goggles (make sure they're level two at least) and explore this place. Sit on the duck at the jetty and it will take you to an edge of the lake. You can't do much there, so it's more of a joy ride. On another, swim towards the landing to your right and you will see a weak wall. Blast it to find a lightning part! Use this like your fire part. It's a great weapon to have! 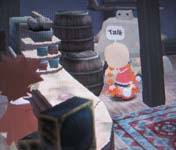 Head back to town to have a look around. You will find Rocky hiding in Disk's shop. He does not want to move at the moment. Check out Cylinder and you will see two new skills! Beta Parts and Wind Parts are for an extended version of the Forward Slash Drill Skill and Downward Lash skill respectively. You will find that Fan's cakes are disappearing again as well. Once out of town, you can also take some time to visit Mole Dojo, though you can't do anything there for now.