From StrategyWiki, the video game walkthrough and strategy guide wiki
(Redirected from Gyro Set)
Jump to navigation Jump to search

Gameplay
Walkthrough
Game A
Game B 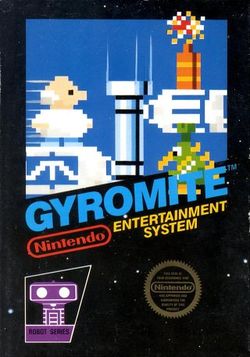 Gyromite is the more common of only two titles that were developed to be used in conjunction with the Nintendo R.O.B. (Robotic Operating Buddy) accessory. The other is Stack-Up. R.O.B. was essentially a marketing trojan horse that convinced retailers to stock the NES in the United States where video games were seen as a passing fad. Without the toy connection, stores would not consider purchasing another video game system that they believed was doomed to failure.

In game A of Gyromite, the player helps Professor Hector (along with second player Professor Vector) collect six stick of dynamite scattered throughout the many levels of the Professors' lab. In his way, however, are blue and red pipes, which are supposed to be raised and lowered through the aid of R.O.B., as he uses the Gyros to keep buttons pressed on the second control pad. The player must pause the game and issue each instruction to R.O.B. one at a time. In game B, the Professors are sleepwalking, and you must constantly issue commands to R.O.B. in order to allow the Professors to reach the other end of the stage safely.

A complete Gyromite comes packaged with two claw hands for R.O.B., two gyros, a gyro spinner (requires its own D battery), a 2-gyro holder, and a contraption that you place second (original) NES controller in that pushes the

buttons through the weight of the Gyros. Because of the speed at which R.O.B. operates (rather slowly), and the frequent misplacement of R.O.B. which resulted in many people possessing only the cartridge, a second player would often take R.O.B.'s place. The Gyromite cartridge also contains one of the highly sought after Famicom-to-NES converters since early versions of the ROM were not converted to the NES cartridge format.

Using R.O.B. and the Gyros[edit]

The specifics of how to play the game will be covered in depth in the walkthrough. This section will explain how to arrange the accessories around R.O.B., and how to use R.O.B. and the Gyros to play the game. The instruction manual states that you should place the Gyro holder tray in positions 4 and 5 on the base of R.O.B. The red and blue actuator is placed in positions 3 and 2, and the Gyro spinner is placed in position 1. Lastly, the second player controller should be placed in the actuator tray (no other controller but the original will fit). The truth is, these accessories can be arranged in any layout that you prefer. Note that with Gyromite, R.O.B.'s arms can be placed in five horizontal positions and only three vertical positions: low, middle, and high.

There's actually quite a bit of flexibility when it comes to how you choose to use the Gyros. When only one gate needs to be raised or lowered, you don't actually need to bother spinning the Gyro. You can actually have R.O.B. hold a Gyro between his "claws", manually place it on one of the actuators, and keep it held down for as long as you need. You only need to use the Gyro spinner if you wish to have both the red and blue actuators pressed. If that is the case, you need to get one Gyro spinning, and drop it on one of the actuators (which can occur from any height). This Gyro will remain on the button, and continue spinning for a couple of minutes. Then pick up the other Gyro and instruct R.O.B. to manually press the other button as you did for just one button. Try to make sure that R.O.B. picks up the spinning Gyro before it comes to rest and falls over.

It is important to be mindful of the height of R.O.B.'s arms as you move them across. At the lowest position, Gyros will collide with the accessories scattered around R.O.B. and hurt the motors inside of him. At the middle position, the Gyros can collide with one another. Also, never instruct R.O.B. to lower his arms to the lowest position over the Gyro Spinner when his arms are closed and a Gyro is in the spinner. Doing so will cause the spinning Gyro to grind against R.O.B.'s plastic arms, resulting in visible scuff marks. It's also a wise idea to avoid touching the sides of the Gyros when they are spinning; the friction can cause a nasty skin burn. Be sure to place R.O.B. on an even surface while playing in order to avoid damaging your R.O.B., as an uneven surface could result in greater chances of R.O.B.'s arms coming into contact with a spinning Gyro.

Gameplay
Walkthrough
Game A
Game B
Retrieved from "https://strategywiki.org/w/index.php?title=Gyromite&oldid=767077"
Categories: