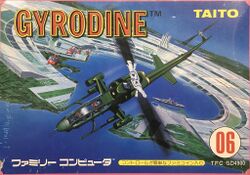 Gyrodine is an arcade game developed by Crux and manufactured by Taito Corporation in 1984. It is a vertically scrolling shooter where the player controls a Gyrodyne aircraft, a type of craft with VTOL (Vertical Take Off and Landing) capabilities. It hovers in the air with helicopter blades, but it contains an addition propulsion system.

In the game, the player must pilot the Gyrodyne over vertically scrolling terrain. The controls contain two button, the player has three weapons at his disposal. One button fires a pair of bullet at enemy aircraft. Another button fires twin machine guns down at the ground. If both buttons are pressed, the Gyrodyne launches a missile with limited heat seeking ability. As a result, the player cannot truly fire both guns at the same time. As the player sweeps to the left or to the right, the guns are angle more and more in those directions until the joystick is released or pushed in the opposite direction.

Gyrodine contains gameplay very similar to Xevious and 1942, but without the same intensity. There are no breaks between levels, and there are long periods where no enemies will attack, only to have them swarm your craft a moment later. The arcade game features especially detailed graphics for its time, drawing tiny people, cars, houses and even beach umbrellas with impressive clarity. The appearance of neutral parties plays a crucial role in your score. Destroying unarmed innocent people will result in a stiff penalty being taken from your score.

Much like Xevious, special icons are hidden and can only be revealed by shooting in the correct location. Revealing the objects yields bonus points. Gyrodine was only ported in Japan by Taito to the MSX home computer and the Famicom. The arcade game was rarely seen outside of Japan, but it could be found in a few arcades in the United States.